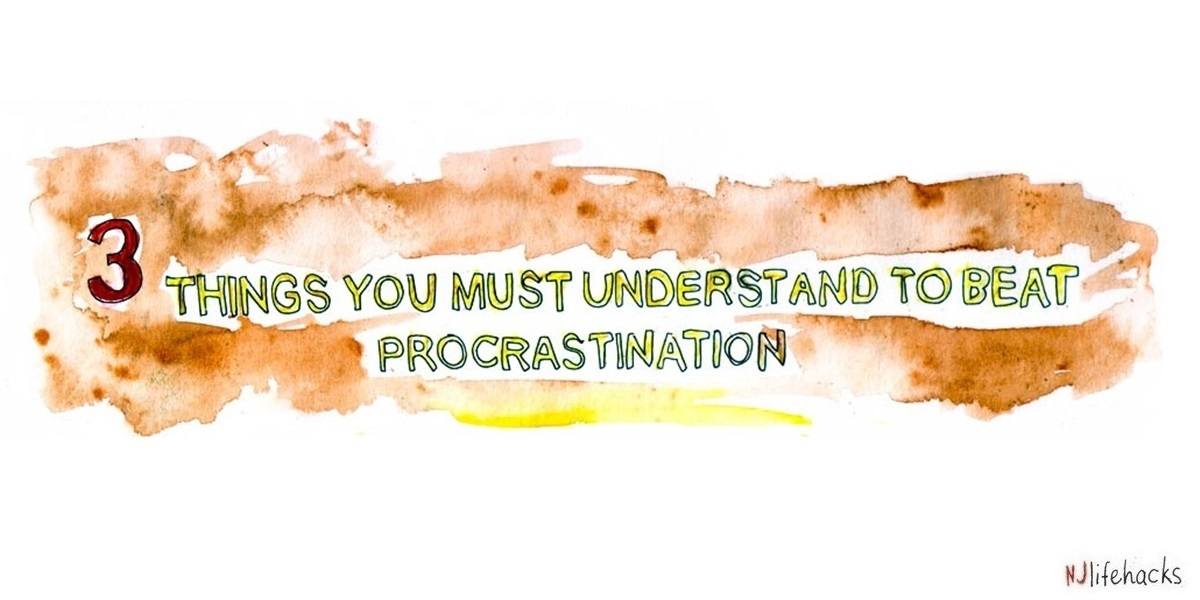 3 Things You MUST Understand If You Want to Beat Procrastination

I’ve been helping people overcome procrastination for years now, through my articles, books, and coaching.

To that end, the one question I have to keep asking myself is this:

“What do people need to know, believe, and do in order to beat procrastination?”

It’s easy for me to get lost in the science, because it’s so fascinating to me. It’s easy to get lost in new discoveries I make in my own life. But I find that I get the best results with people when I focus on that question.

It forces me to boil down everything to what matters, to the few pieces of knowledge and the few actions that truly move the needle in overcoming this dreadful habit.

So in today’s article, we’ll discuss three things you MUST understand to beat procrastination as quickly and effectively as possible.

I’m not a big fan of motivational speakers, the you-can-achieve-anything-you-want-in-life kind of guys. I cringe when seeing people on stage shouting and clapping and jumping around. I’m a calm dude. Introverted. Quiet. Reflective.

That said, I do believe that you can achieve almost anything you want in life. Whether you want to drive a fast car, become a multimillionaire, travel the world, marry the love of your life, or move into your dream house – those are up for grabs.

It won’t happen overnight. It won’t be easy. It won’t necessarily be fun. In fact, depending on what you want to achieve, it will take decades of dedication, hard work, sacrifice, and discipline. But if you want it bad enough and your goal is within the realm of basic laws of physics, then, yes, you can.

Don’t be stupid in choosing your goals, of course. You won’t become a basketball pro if you’re 30 years old and never played in your life, and you probably won’t become the next Mark Zuckerberg, either. You have to be somewhat realistic.

“If you want to be successful, find someone who has achieved the results you want and copy what they do and you’ll achieve the same results,” says Tony Robbins, funny enough one of the motivational speakers that tend to make me cringe.

Bottom line: You can overcome procrastination. And you can become a highly productive and disciplined person. Someone who gets up early in the morning, exercises regularly, treats people with kindness and compassion, gets done what needs to get done, dispatches tasks easily, and so on. You just need to install the right beliefs and perform the right actions. It’s no miracle. It’s a matter of cause and effect.

(Note: If the law of cause and effect doesn’t fully convince you that change is possible for you, check out Carol Dweck’s work on the growth versus the fixed mindset, or anything on the science of neuroplasticity.)

Once you accept that change is possible, you must understand that it involves a lot of hard work, effort, discipline, sacrifice, and pain – blood, sweat, and tears if you will.

Digging myself out of my procrastination misery was one of the hardest things I ever did. I was brought to my knees many times by the guilt, disappointment, and self-criticism. Every progress I made was immediately followed by a setback. Every inch of forward-movement cost an insane amount of effort. Every day I was battling with myself, slowly building up a little bit of discipline until eventually changes started to stick and things got easier.

Listen, I would love to tell you that overcoming procrastination was easy, that being disciplined was easy, that reaching your goals was as simple as doing some visualization exercises. But it’s not true. Unless you’re one of the lucky few who’ve had “tough” childhoods and come out with a work ethic and levels of self-discipline most of us can only dream of, you’ll have to work for it. You’ll have to put in tons and tons of effort to slowly build up that discipline and work ethic.

The truth is, anyone who’s achieved magnificent things in life had to work hard for it. The media – newspapers, tv programs, and so on – just won’t show it to us. We see the gold medals, fancy cars, individual honors, and scream out, “Oh, what a legend! What a natural talent this person is. So talented. So natural. Different from the rest of us. Born a genius!”

“Work like hell. I mean you just have to put in 80 to 100 hour weeks every week. This improves the odds of success.” – Elon Musk, CEO of Tesla and SpaceX

“I can’t relate to lazy people. We don’t speak the same language. I don’t understand you. I don’t want to understand you.“ – Kobe Bryant, one of the greatest basketball players of all time

“The harder you work, the luckier you get.” – Gary Player, one of the greatest players of all time

“The only thing that I see that is distinctly different about me is I'm not afraid to die on a treadmill. I will not be out-worked, period. You might have more talent than me, you might be smarter than me, you might be sexier than me, you might be all of those things you got it on me in nine categories. But if we get on the treadmill together, there's two things: You're getting off first, or I'm going to die. It's really that simple, right? You're not going to out-work me.” – Will Smith, one of the most successful and best paid actors of all time

“It’s not about money or connections — it’s the willingness to outwork and out-learn everyone.” – Mark Cuban, self-made multibillionaire

“For me, education has never been simply a policy issue - it's personal. Neither of my parents and hardly anyone in the neighborhood where I grew up went to college. But thanks to a lot of hard work and plenty of financial aid, I had the opportunity to attend some of the finest universities in this country.” – Michelle Obama

“I believe in hard work and luck, and that the first often leads to the second.” – J.K. Rowling

“I’ve never met anyone that works harder than me in my industry.” – Beyoncé

Do you think any of these people wastes hours every day on social media? Watching television? Reading gossip? Watching Netflix? Eating crappy food?

Face it, if you want to overcome procrastination and create an epic life, you need to start putting in the work.

“You” is really all you have. Your beliefs, skills, knowledge, experiences, health, fitness, awareness… Everything can be taken away from you except who you are as a person. So, doesn’t it make sense to invest in that?

Charlie Munger, self-made billionaire and business partner of Warren Buffett, writes in one of my favorite quotes of all time, “I constantly see people rise in life who are not the smartest, sometimes not even the most diligent, but they are learning machines. They go to bed every night a little wiser than they were when they got up and boy does that help, particularly when you have a long run ahead of you.”

“Spend each day trying to be a little wiser than you were when you woke up. Discharge your duties faithfully and well. Step by step you get ahead, but not necessarily in fast spurts. But you build discipline by preparing for fast spurts. Slug it out one inch at a time, day by day. At the end of the day – if you live long enough – most people get what they deserve.”

Albert Einstein said something similar, “Wisdom is not a product of schooling but of the lifelong learning attempt to acquire it.”

If you’re serious about overcoming procrastination, your best bet is to keep at it. Don’t give up after setbacks. Get back on track. Come back stronger. Learn from your mistakes. Do that for a long enough period, and you’ll be shocked at what you’re capable of. But keep investing in yourself. Realize it’s a marathon, not a sprint.

I sincerely hope you’ve enjoyed these tips and found them valuable. If you did, you’ll love our brand new online course, Procrastinator to Producer.

Best of all, you’ve got nothing to lose by signing up. If you love it, great. And if you don’t, just ask for a refund and you’ll get your money back. No big deal, we’re easy.

Here’s where you can join us.