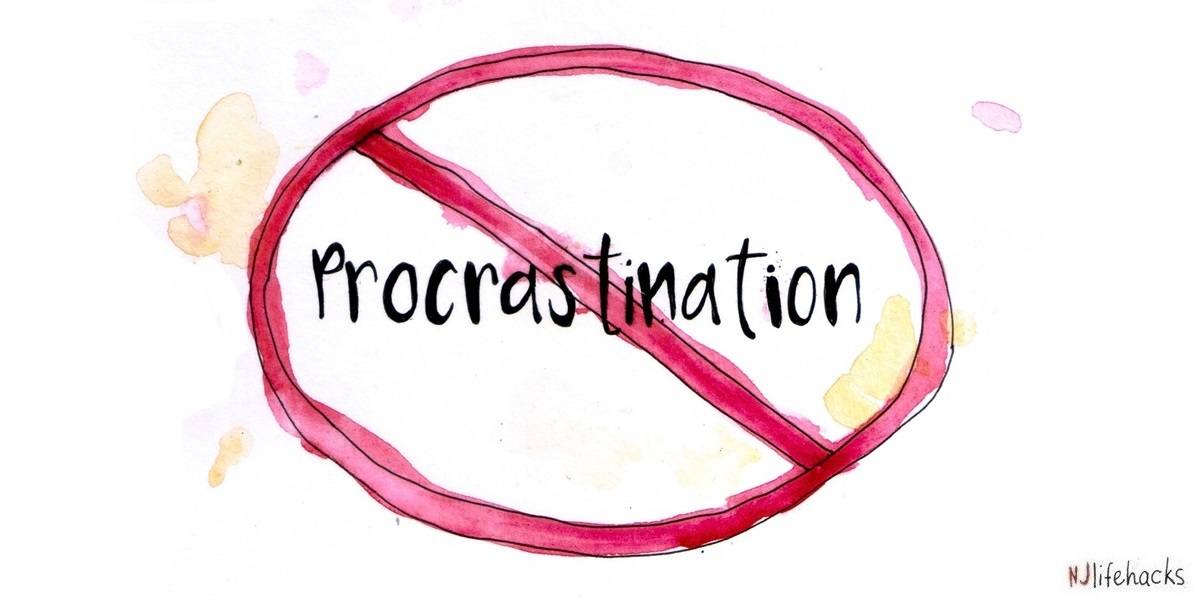 3 Anti Procrastination Habits: Install These in Your Life and Watch Your Productivity Soar

(EXCITING NEWS: I recently published a book on overcoming procrastination. You can check it out here on Amazon!)

This statement, attributed to neuropsychologist Donald Hebb, means that every experience we have becomes embedded in our brains, and the more an action is repeated, the stronger the connection between these neurons (brain cells) becomes.

It states that we’re establishing patterns in our lives – how we react in certain situations, how we interact with people in our lives, what we do after waking up, how we feel under certain circumstances, and so on.

The more often we repeat an action, the stronger its pattern becomes and the more likely we are to repeat it in the future. In other words, we are creatures of habits.

Now, where’s the connection to procrastination? Is it just another habit?

I don’t think it’s just another habit. I believe it goes much, much deeper than simply being a pattern of behavior. It has to do with unconscious fears, feelings of inadequacy, coping mechanisms, and so on.

Now, the thing with habits is you can’t eliminate them, you can only replace them. That’s where this article comes into play. We’ll look at three specific procrastination-related situations and explore new ways of reacting to them.

The more often you repeat the new actions, the stronger the habits become and the more likely you are to keep acting in the new and more productive ways in the future.

Do any of these excuses sound familiar:

Procrastination starts innocently enough. We don’t feel like doing what we’re supposed to do and create an excuse to delay the task. And that’s when it starts…

After checking email, we might as well hop on Facebook real quick. And then on Twitter. Oh, and how about another coffee to get some energy? And because drinking coffee by itself is boring, we need to watch a YouTube video. Oh, there’s actually a lot of cool videos here! Let me…

We keep telling ourselves that it’ll just be another minute, just this other thing, just one last… and before we know it, we’ve wasted an hour doing absolutely nothing.

Even worse, that’s often just the beginning. Once you realize you’ve been unproductive and still not any closer to finishing your task, you start feeling anxious, guilty, maybe even ashamed. Now you’re in real trouble. Why? Because these emotions make you feel terrible, sap your motivation, and kill your self-control. All you want to do is run away from those negative feelings and do something to repair your mood. So you delay the task again with the hope of feeling better later on. Only problem? You’ll likely feel even worse because you’ve wasted yet more time. Now you feel an even stronger urge to run away from those painful emotions. So you keep delaying. And on and on it goes…

The moment you become aware of what’s going on, pull the plug! Turn off your computer. Turn off your phone. Unplug. Take a step back and just do nothing for two to three minutes. Realize you’re in a procrastination loop. Realize further delaying will only make things worse. Realize the only way to feel better and get stuff done is to overcome resistance and get started.

The important part is getting out of the loop the moment you realize you’re in it. Do not delay getting out! Get out immediately. This’ll help you break the pattern and stops you from further escalating the situation.

Once you’ve pulled the plug, use your tool of choice for overcoming resistance and getting started. As you’re about to learn in habit #2, I recommend setting a timer.

Putting it all together, here’s what I suggest you do: First, pull the plug, figuratively and literally. Turn off all your devices and abstain from doing anything for two minutes. Then, realize you’re in a procrastination loop and might waste another day of your life if you can’t get out of it. Lastly, set a timer for 20 minutes and get started on the task you’ve been putting off.

Yes, this will be difficult in the beginning. You’ll need to summon up all your effort and just do it. Once you’ve done it a couple of times, it will become more habitual. Every time you get out of the maze, you build the habit of doing it. And once you’re in the habit of pulling the plug as soon as you realize what’s going on, you’ll no longer be at the mercy of this dreadful procrastination loop. That’s habit #1.

2. Use Timers to Overcome Resistance

As I explain in this article, procrastination is a problem of being unable to get started. Once we’re actually doing what we’re supposed to do, things tend to brighten up – the task is actually kind of fun, we’re feeling good about ourselves for doing it, we’re making progress, and so on.

The trouble is we can’t make the all-important move from inaction to action.

Using a timer like this allows you to focus on the process and takes your mind off the dreaded task, the outcome, or whatever else is causing the inner resistance.

Here’s another procrastination pattern you’re probably all too familiar with: You feel eager and energized to take a new action or get something done. You are motivated, “Yes, this time round, I’ll do it!”

Then, you come up with some bullshit excuse for not getting started right now…

Unfortunately, at that later time, the early enthusiasm and optimism have disappeared. You start wondering if it’s such a good idea after all, if it’s really that important. In other words, you’re coming up with excuses. The longer you delay, the worse it’ll get. You’ll have less and less motivation. You’ll create more and more excuses. All the while, your chances of actually doing it are getting slimmer and slimmer.

If you still manage to take action, great – you got lucky. If you don’t, you’ll beat yourself up over it, “What’s wrong with me?!” Why do I always do this?” You feel discouraged, disappointed, guilty, and perhaps resentful and angry at yourself.

What happened here? You fell prey to the law of diminishing intent, which states: “The longer you wait to do something you should do now, the greater the odds that you will never actually do it.”

This is a big problem for many of us, isn’t it? We’re in the habit of postponing action even if the motivation is there. It’s okay not to take action when we feel like shit, but we should at least be able to get going when we’re feeling good, shouldn’t we?

Let’s break this pattern by creating a new habit for taking action when we feel inspired. I know just the right one for this: It’s called the 5-second rule, invented by motivational speaker Mel Robbins. It states: “If you have an impulse to act on a goal, you must physically move within 5 seconds or your brain will kill the idea.”

Here’s how she explains it in her own words:

“So if you have a goal of gaining more respect in the workplace, you have to raise your hand the next time you’re in a meeting and you have a great idea.

If you have a goal of losing weight, you can take action right now by researching healthy meal options and setting daily reminders on your phone that will prompt you to go to the gym.

If you have a goal of launching your own business, and you have no idea where to start, get on Google right now and research other companies in your field of interest, see what they’re doing and decide what you’ll do the same and where you’ll differentiate yourself. Then google a free business plan template, and then fill it out. Get serious about it and put your intentions in writing.

Whatever your goals are, show the world, and yourself, that you’re serious by taking action, however insignificant that action may seem, RIGHT NOW.

Because when you physically move, your brain starts to build new habits. When you do something you’re not used to doing, you are in the act of building new habits and erasing existing ones.”

Simple enough: Next time you feel the urge to take action, move quickly. Don’t let your mind come up with excuses and talk you out of this. Get started immediately. Give yourself a countdown with the 5-second rule: 5-4-3-2-1-GO!

Again, this may feel a bit awkward the first few times you try it. But the more often you do it, the stronger the habit will become. Before you know it, you’ll habitually use the 5-second rule whenever you feel a surge of inspiration and enthusiasm.

P.S. As You’re Building these Habits, Keep This in Mind…

I hope you’ll give at least one of these habits a try. I can tell you from my own experience that they can make quite the difference – especially as they start becoming more and more automatic.

I want to give you one last tip. As you’re implementing what you’ve learned here today, please don’t expect miracles. If you’re a chronic procrastinator, you will fail over and over again with using these tactics. For example, you’ll fall prey to the law of diminishing intent time and time again.

What matters is not that you fail. What matters is how you react when you fail. Overcoming procrastination is a long and arduous journey (at least it’s been for me!) with many inevitable ups and downs.

As I explain in greater detail in this article, the way to respond to failure is through self-forgiveness. As you catch yourself after yet another act of procrastination, please don’t beat yourself up over it. Instead, treat yourself with respect, warmth, care, and compassion. Forgive yourself. Resolve to do better next time. Counter-intuitive as it may sound, this will greatly accelerate your results.

I have a lot to say about procrastination. After all, it’s been my constant companion since I was a little kid.

If you resonated with one of these habits, you’ll probably enjoy my free 17-page anti-procrastination guide, 33 Proven Tactics to Procrastinate Less and Get More Done. You can download it for free by clicking the link below:

==> 33 Proven Tactics to Procrastinate Less and Get More Done