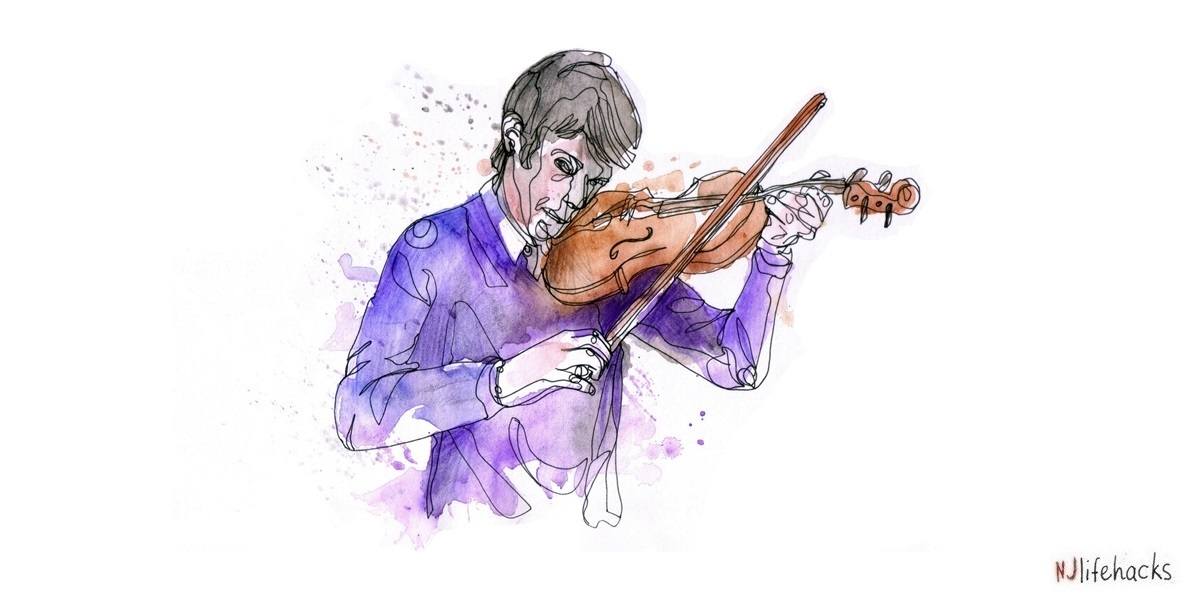 As discussed in our latest article, deliberate practice is the most effective method for developing and improving skills rapidly.

Unfortunately, despite reading multiple books and scientific papers on the topic, I have found it difficult to fully grasp what deliberate practice looks like in the real world. In an attempt to better understand the nuances of this powerful training method, I’ve started collecting examples of deliberate practice in action.

Here are 14 examples of deliberate practice in action.

Before we get to the examples, recall the various principles deliberate practice is based on:

As you read through the examples, you’ll see those principles applied in different ways.

One of my favorite illustrations of the power of deliberate practice comes from Anders Ericsson himself. In the late 1970s, he instructed one of his students, Steve Faloon, to memorize random strings of numbers. Each practice session went like this: Ericsson would start with a random five-digit string, which he said out loud, and Steve had to repeat. If he got it right, Ericsson would go to six digits, and so on, increasing the length of the string by one each time Steve got it right. If he got it wrong, Ericsson would drop the length of the string by two and go again.

By the end of the fourth one-hour session, Steve could reliably recite back strings of 7 to 8 digits. During the fifth session, he succeeded at remembering his first 10 digit and 11 digit strings. By the 60th session, he was able to remember twenty digits. By the 200th session, he could memorize strings of 82 random digits (!!!).

That’s the power of deliberate practice. Imagine hearing 82 random numbers out loud at one per second and being able to remember them all. Here’s what 82 random digits look like:

The reason for this incredible improvement lies in the deliberate practice aspects of the training: Steve received immediate feedback and was always practicing right at the edge of his comfort zone. By consistently pushing himself beyond his current limits, his limits expanded.

The most effective strategy chess players use to improve is a brilliant example of deliberate practice: They study the games of grandmasters, try to reproduce them move by move, and, when they choose a move different from what the grandmaster chose, study the position again to see what they missed. It’s immediate feedback. It’s reaching, falling short, and reaching again.

Another example comes from Josh Waitzkin’s book, The Art of Learning: Chess players will sometimes remove pieces from the board, which allows them to practice certain scenarios, such as the end game with just the King and a few Pawns. This is an excellent example of chunking – practicing one specific element of the overall game.

Back in high school, I played an online game called Demigod. I was quite competitive and racked up over 100,000 minutes of total gametime. One thing I remember from that time is that total playtime and skill level of a player didn’t always match. Some people had played far more than me, but clearly weren’t as good a player I was.

Looking back, it’s clear what made the difference. For one thing, I usually played at the limit of my comfort zone. I played against higher skilled players in order to learn from them, while ohers enjoyed playing against inferior players just to feel good about themselves.

Another strategy I used was studying the replays of the most skilled players in the game. I was interested in such things as, “What items do they buy? What skills do they upgrade? Where do they go on the map?” In retrospect, my approach was very methodical and used various aspects of deliberate practice.

In The Talent Code, Daniel Coyle presents futsal, a type of football, as a form of deliberate practice. Futsal is different from regular football in a few ways: the ball is smaller, heavier, and barely bounces. The game is played on concrete floor. The field is much smaller than a normal football pitch. Each side typically plays with five to six players, instead of eleven.

Here’s how Coyle explains the deliberate practice aspects of the game: “Futsal players touch the ball far more often than soccer players – six times more often per minute, according to a Liverpool University study. The smaller, heavier ball demands and rewards more precise handling – as coaches point out, you can’t get out of a tight spot simply by booting the ball downfield. Sharp passing is paramount: the game is all about looking for angles and spaces and working quick combinations with other players. Ball control and vision are crucial, so that when futsal players play the full-size game, they feel as if they have acres of free space in which to operate.”

Some of the best examples of using deliberate practice for improving writing come from Benjamin Franklin. One of his strategies involved deeply studying a passage in a good book and then try to reproduce its content and structure. He then compared his reproduction with the original to identify differences, which allowed him to discover his faults and correct them.

When Franklin realized his vocabulary wasn’t big enough, he came up with another technique: he took a good piece of writing and transformed it into rhyming verses, which forced him to come up with words he might not normally think of. At a later time, he would take the poems and transform them back into normal prose. This approach helped him get into the habit of finding just the right word and increased the number of words he could call up from his memory.

In Peak, Anders Ericsson tells the story of a circus student training to become a ringmaster – a job that involves introducing the various acts, and filling up any empty time between acts if there is a delay. To train this skill, the student went to downtown Rio and struck up conversations with random people, most of which were in a hurry. His goal: keep them interested enough to stay and listen to what he had to say.

He used his watch to see exactly how long he kept each conversation going with the goal of slowly increasing the length of those conversations. He spent a couple of hours each day doing this, taking notes about which techniques worked well and which didn’t.

Anders Ericsson recounts the following story in Peak. One student, in an attempt to improve her English, went to the mall and stopped a number of shoppers, asking each the same question. Hearing similar answers over and over allowed her to understand the words being spoken by native speakers at full speed. If she had asked different questions, her comprehension probably wouldn’t have improved as much.

Another example involves students watching the same English movies with subtitles over and over again, covering the subtitles and trying to comprehend what was being said. To check their understanding, they would uncover the subtitles. Clearly, this approach was less fun than just watching movie after movie. However, it was also much more effective at improving their ability to understand English.

No matter what you’re trying to learn – math, marketing, economics, psychology – one way to practice deliberately is through the use of case studies. In marketing, for example, you may get a scenario and are asked to come up with the best possible solution to market a product. Once you’ve come up with your own solution, you can then compare it to other people’s solution and see where you could have improved.

Astronauts, pilots, and other professions can use simulators as a powerful form of deliberate practice. Simulators allow you to go right to the edge of your comfort zone, struggle, make errors, and learn from them. In the real world, moving past your comfort zone might lead to serious injury or even death. In the simulator, no such risk exists.

Simulators also allow people to chunk and practice on their respective weaknesses. A fighter pilot might “take off” and “land” a dozen times during an hour of practice. No such thing is possible when using real jets.

Toyota used to be a middle-sized car company thirty years ago. Today, it’s the world’s largest automaker. The rapid rise of Toyota is in part due to a deliberate practice approach called kaizen, which is Japanese and stands for “continuous improvement.” It’s a process of finding and improving small problems.

Toyota urges every employee to be on the constant lookout for small improvements. It’s estimated that each year the company implements around a thousand fixes in each of its assembly lines, resulting in about a million tiny fixes overall.

This approach is similar to that of a tennis player who tweaks her game tiny step by tiny step over years of practice. Just like the tennis player, Toyota becomes a little bit better with each iteration, in what is a very deliberate and methodical approach.

The lean startup methodology is a deliberate practice approach to starting a business populated by Eric Ries. The idea is to start with a minimum viable product, launch it to customers, gather feedback, and then use that feedback to make the product better and better and better.

This approach is methodical, feedback-driven, and deliberate – similar to the training practices of elite athletes and musicians.

In Peak, Anders Ericsson gives the following advice for instilling some deliberate practice into business meetings: “It might go like this: The speaker chooses a particular skill to focus on during the presentation – telling engaging stories, for example, or speaking more extemporaneously and relying less on the PowerPoint slides – and then tries to make that particular improvement during the presentation.”

“Meanwhile, the audience takes notes on how the presenter’s performance went, and afterward they practice giving feedback… If the company makes it a regular practice in all staff meetings, employees can steadily improve on various skills.”

Cognitive Behavioral Therapy (CBT) is a highly effective form of therapy, often used in the treatment of depression and anxiety. Unlike psychotherapy and other approaches, CBT focuses on practice. There’s not much talk about people’s past, no attempts to deconstruct childhood traumas, or hour-long sessions about a person’s parents.

This focus on practice and skills, rather than knowledge and passive activities, is a classic principle of deliberate practice.

The Shyness Clinic is an example of CBT in action. It mainly uses an approach called exposure therapy, which urges participants to gradually expose themselves to more and more challenging social situations.

Clients start by attempting easy challenges, such as role-playing water-cooler chat or phone calls. As they get comfortable with the easier challenges, they gradually move up the challenge scale until they perform feats like purposely embarrassing themselves by dropping a watermelon in a crowded supermarket.

By regularly practicing at the edge of their comfort zones, the clients slowly expand those comfort zones. Situations that used to make them uncomfortable no longer do, and, as a result, they become more and more outgoing.

This was the fifth article in a series on expert performance and deliberate practice. Here’s a full overview of all articles in the series.