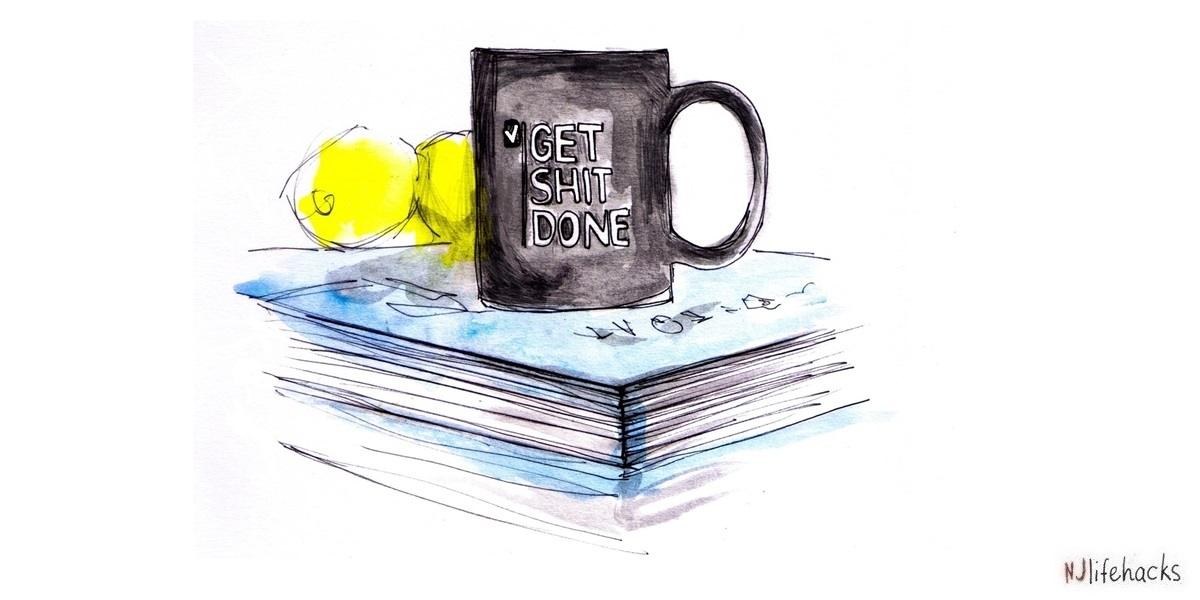 More and better tools mean greater productivity. “Getting things done the dysfunctional way” is another such tool. Add it to your repertoire. Use it wisely.

Wiggling Through by Subtle Maneuvers

“Time is short, my strength is limited, the office is a horror, the apartment is noisy, and if a pleasant, straightforward life is not possible, then one must try to wriggle through by subtle maneuvers.” – Franz Kafka

“Kafka is one of 161 inspired–and inspiring–minds, among them, novelists, poets, playwrights, painters, philosophers, scientists, and mathematicians, who describe how they subtly maneuver the many (self-inflicted) obstacles and (self-imposed) daily rituals to get done the work they love to do, whether by waking early or staying up late; whether by self-medicating with doughnuts or bathing, drinking vast quantities of coffee, or taking long daily walks,” writes Mason Curry in the introduction of Daily Rituals.

“Thomas Wolfe wrote standing up in the kitchen, the top of the refrigerator as his desk, dreamily fondling his ‘male configurations’… Jean-Paul Sartre chewed on Corydrane tablets (a mix of amphetamine and aspirin), ingesting ten times the recommended dose each day… Descartes liked to linger in bed, his mind wandering in sleep through woods, gardens, and enchanted palaces where he experienced “every pleasure imaginable.”

Daily Rituals details 161 routines of some of the most brilliant minds the world has seen over the last four decades. Far from being the disciplined and organized people we imagine them to be, many of them relied on self-medication and other dysfunctional habits to get their work done.

“She Would Continue to Use Amphetamines for the Next Three Decades…”

Consider a few of the dysfunctional tools these brilliant minds relied on.

William James, often dubbed the Father of American psychology, “suffered from insomnia, particularly when he was deep into a writing project, and beginning in the 1880s used chloroform to put himself to sleep.”

Ayn Rand, the author of Atlas Shrugged and The Fountainhead, relied on a prescription drug called Benedrine to overcome chronic fatigue. “The Benzedrine helped Rand push through the last stages of The Fountainhead, but it soon became a crutch. She would continue to use amphetamines for the next three decades, even as her overuse led to mood swings, irritability, emotional outbursts, and paranoia – traits Rand was susceptible to even without drugs.”

Sigmund Freud, the founder of psychoanalysis, heavily relied on cigars, “which he smoked continually, going through as many as twenty a day from his mid-twenties until near the end of his life, despite several warnings from doctors and the increasingly dire health problems that dogged him throughout his later years.”

Mark Twain, the author of The Adventures of Tom Sawyer, according to one of his best friends, “was troubled with sleeplessness, or, rather, with reluctant sleepiness, and he had various specifics for promoting it. At first, it had been champagne just before going to bed, and we provided that, but later, he appeared from Boston with four bottles of later-beer under his arms; lager-beer, he said now, was the only thing to make you go to sleep, and we provided that. Still later, on a visit I paid him at Hartford, I learned that hot Scotch was the only soporific worth considering, and Scotch whiskey duly found its place on our sideboard.”

We learn from these A-players that being a bit dysfunctional is fine. It’s okay to rely on coffee, wine, nicotine, or other drugs to get the job done. We don’t need to be perfect – neither is anyone else.

As Tim Ferriss explains in an article aptly titled ‘Productivity’ Tricks for the Neurotic, Manic-Depressive, and Crazy (Like Me): “Most ‘superheroes’ are nothing of the sort. They’re weird, neurotic creatures who do big things DESPITE lots of self-defeating habits and self-talk.”

Ferriss, himself a successful author and entrepreneur, mentions some of his own dysfunctional habits, such as taking his daily caffeine intake so high that his resting heart rate was 120+ beats per minute, or wearing the same jeans for a week straight “just to have a much-needed constant during weeks of chaos.”

After the festive period, my productivity habits were all over the place. I didn’t have clear priorities or goals.  My circadian rhythm was out of sync. My body was using most of its energy for detoxing. I was mindlessly checking email throughout the day. And I was experiencing severe brain fog and lack of motivation.

In short, I wasn’t in the best condition for getting things done. So what did I do? Instead of just wasting time being a zombie, I decided to get things done the dysfunctional way – relying on focus-enhancing, mind-numbing, tunnel-vision-producing substances, such as smart caffeine (coffee combined with the amino acid l-theanine), modafinil, ephedrine, kratom, or even just some good ole’ wine or beer.

With deadlines approaching and projects needing to get over the line, we don’t always have the luxury for building our habits, focus, and energy levels back to where they need to be. So we look into our toolbox and find a way to make it happen, dysfunctional or otherwise.

A Caveat: No Need to Be Stupid About This

I want to make this very clear. Getting things done the dysfunctional way is best viewed as an emergency tactic, not a long-term solution. While I do occasionally use it, it is by no means my long-term plan for living a productive, healthy, and fulfilling life. I’m using this as a way to get things done when I really, really need to.

I’m convinced that long-term health and productivity are optimized by becoming more and more functional – by becoming more mindful, aware, self-compassionate, and calm. And this is achieved through building better habits, such as taking frequent breaks, moving intermittently throughout the day, exercising between work periods, getting high-quality sleep, planning healthy leisure activities, or backing fun and social activities into our days.

Also, I don’t endorse the use of illegal drugs or medications. Always speak to your doctor and get a prescription before ingesting any delicate substances into your system.

Getting things done the dysfunctional way is a powerful tool to have in your toolkit. Use it wisely.