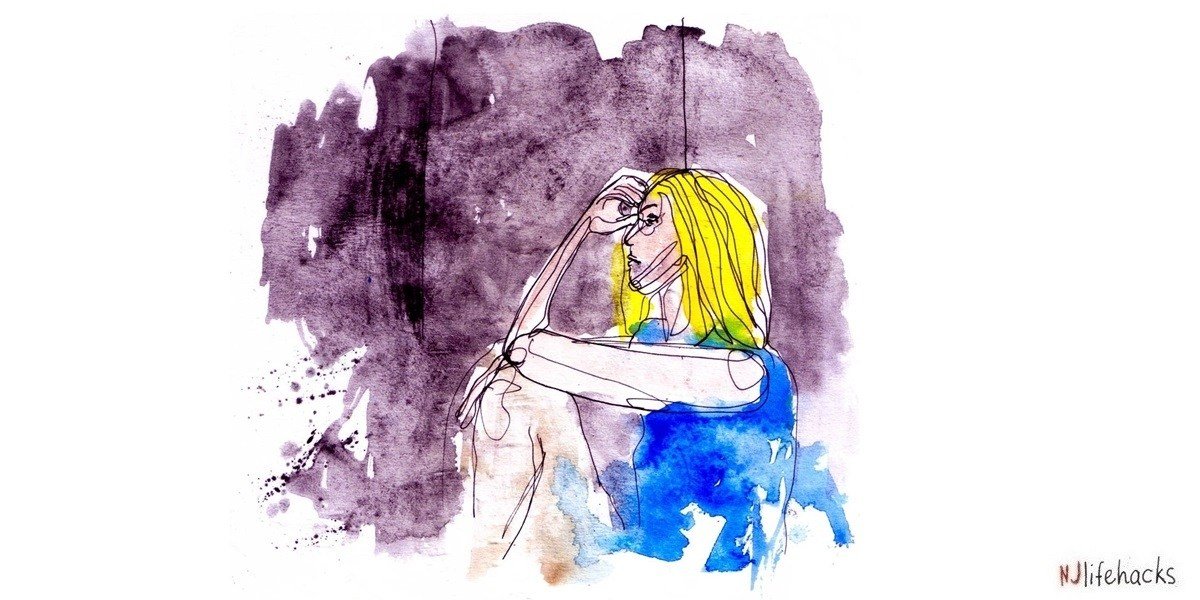 Guilt is an emotion all too familiar to most procrastinators.

I’ve been stuck in that loop for the greater part of my adolescence and young adulthood. And while I still get stuck in it from time to time, I’ve learned to handle it well over the last few years, and it’s helped me greatly in overcoming procrastination and becoming more disciplined and productive. Let me show you how you can do the same.

A Double-Edged Sword: Why Moderate Guilt is Necessary, But Excessive Guilt Harms Us

Guilt serves a purpose. Consider people who lack this emotional faculty, such as psychopaths and sociopaths, and you’ll immediately agree with me. People who fail to experience any guilt when harming innocent people will as a result destroy the lives of other people as well as their own.

In addition to being a safeguard against destructive impulses, guilt also acts as a learning tool. We feel guilty when we fail to live up to our own expectations, fail to put our good intentions into action, fail to act in accordance with our values, or fail to do what we know we should be doing. The resultant guilt alerts us that, “hey, this wasn’t good, let’s do better next time.”

The pain we feel when touching a hot stove teaches us not to repeat this action. Likewise, the pain of guilt wants to teach us not to make the same mistakes twice, to become a better person who acts more in line with her intentions, values, and commitments. That’s how moderate and appropriate guilt helps us become healthier, happier, more loving, compassionate, and kind people.

It’s the “feeling bad” part that’s at the core of procrastination. You see, when you are feeling bad, your resourcefulness goes down the drain. Your ability to self-regulate and control your own behavior diminishes. Your pre-frontal cortex goes offline. The only goal you’re now pursuing is to feel better, to repair your mood by watching television, eating crappy food, playing video games, drinking alcohol, or otherwise numbing your painful feelings. In short, guilt makes you feel bad which makes you more likely to procrastinate.

So, that’s the dual nature of guilt. On the one hand, it’s a learning tool and necessary safeguard against destructive impulses. On the other hand, it can fail its purpose and become dysfunctional if excessive and paired with low self-discipline and certain other personality traits.

Cool. It’s good to know there’s a purpose for guilt, but what if the dysfunctional type is killing your productivity, your mood, your health, and your happiness?

5 Ways to Reduce Guilt-Related Procrastination (that Worked for Me)

Excessive guilt played a major part in my severe procrastination. For reasons I don’t yet understand, I seem to have a strong propensity to feel guilty no matter what I do. Even tiny mistakes can pile on heavy doses of guilt, and while I can mostly deal with such episodes nowadays, they used to create massive headaches for me in the past and often debilitate me for hours or even days on end.

For me, this propensity to feel guilty combined with low self-discipline, self-pity, and heavy self-criticism – a quadruple combo if you will – to create an epic level of procrastination. The lack of discipline meant that I often felt guilty for not living up to expectations, “I should have done this. I should have done that.” Then came the self-criticism, “Grrr, I’m so stupid! I can’t get anything right. I’m such an idiot!!” And the self-pity, “Oh, poor me. I can’t get myself to do anything. Why am I feeling so guilty? Why can’t I be more disciplined?”

This cocktail made me feel terrible and the only way I knew how to deal with it was to numb myself by watching television, spending hours on my phone, stuffing food into my system, etc.. I was a very dysfunctional person at times and the only way I could get things done was through massive outside pressure. Like I said, I used to be a hardcore procrastinator.

The good news is, I’ve found a way out of that misery, and I’m about to show you how I’ve done it. Here are five strategies I’ve used to overcome guilt-related procrastination. They’ve worked for me, and I’m sure they’ll work for you too.

1. Let Self-Criticism Behind and Try Self-Compassion Instead

Guilt and self-criticism often go together. Not only do we feel guilty for failing to live up to our intentions, but we also criticize ourselves for it, adding even more negativity to the mix. As I’ve explained before, self-criticism, by making you feel worse, only leads to more procrastination. In general, self-criticism is associated with everything from depression, to anxiety, dissatisfaction with life, suicide, and even lower material success.

The superior alternative is self-compassion, defined by Kristin Neff as the combination of self-kindness, common humanity, and mindfulness. It’s about treating yourself like a friend or a small child, with acceptance, kindness, warmth, and understanding. This kind of self-relationship is associated with greater happiness, optimism, less negative emotions, more willpower, better relationships, and other positive outcomes.

Next time you’re feeling guilty, become aware of any self-critical thoughts and try to let them go and replace them with compassionate self-talk, such as, “It’s okay to feel that way. It’s okay to feel disappointed and guilty. That’s only natural. Others feel the same way. You did the best you could and it didn’t work out this time. And that’s fine. We’ll try again next time. This isn’t the end of the world.”

The key to forgiveness is moving from self-punishment to self-acceptance. This reduces whichever negative emotions you’re experiencing and is often accompanied by a vow to do better next time, which encourages you to approach difficult tasks rather than avoid them.

Next time you’re experiencing guilt, recall some of the points I made under the “Realize You Did the Best You Could” headline. This will allow you to forgive yourself quickly and easily.

Self-pity is defined as “excessive, self-absorbed unhappiness over one's own troubles.” I wasn’t aware of it at the time, but self-pity often accompanied guilt during my hardcore procrastination days.

Instead of realizing the innate limitations of human nature and accepting my mistakes with humility (see tip #4), I’d spend hours and hours wallowing in a cocktail of guilt and self-pity.

Next time you’re experiencing an episode of excessive guilt, pay close attention and watch out for any signs of self-indulging and self-victimization. A beautiful thing happens when you see self-pity for what it is: You immediately snap out of it and realize you can just accept your mistakes and get back on track.

4. Realize You Did the Best You Could

If you were to go back in time to the exact moment of making the guilt-inducing mistake, and you would be there with the exact same thoughts, emotions, beliefs, perceptions, and awareness, you couldn’t help but make the same error again. If all aspects of that situation were the same again, no other action would be possible.

The old self was less mature than the present self. The old self, not having made the mistake yet, hadn’t made that learning experience yet, and therefore could not have possible known what you know now.

David R. Hawkins puts this beautifully in Transcending the Levels of Consciousness: “The present self ‘is,’ and the former self ‘was,’ and, in truth, that which ‘was’ is not identical with that which ‘is.’ Regret and guilt result from equating the present self that ‘is’ with the former self that ‘was’ but actually is no more; they are not the same.”

We look back and think, “I should have known better. I shouldn’t have made that mistake.” This is an illusion. It’s flawed thinking. In truth, your past history represents the best that you were capable of doing under given circumstances, which include your thoughts, emotions, and perceptions at the time.

“Because the evolution of consciousness, both individually and collectively, is progressive, the past, by selection, appears to compare unfavorably with the present. Lessons can be learned only by the unfolding of experience over a time continuum; thus, there is always more that hypothetically could be known,” explains Hawkins.

“In reality, one cannot know at age twenty-five the information that is accrued by age fifty. Everyone thinks, ‘If I had only known that, I would have done it differently.’ Thus, with humility, it can be seen that every given moment includes limitation. What we were is not what we are now. Mistakes are intrinsic to the learning process, which is the fate of the human condition itself. Because the mind’s awareness is limited, it compensates by substituting presumptions (an educated guess) and therefore, operationally, choices and decisions are based on the seemingly best option, as stated by Socrates’ dictum.”

Socrates dictum he’s referring to: “All mean seek only what they perceive as the good.”

Excessive guilt is a denial of our limitations. We tell ourselves we should have done better. We overestimate ourselves in what is a disguised form of egotism, arrogance, pomposity. “The great Me should have known better.” Wallowing in guilt is narcissistic in a way.

(I know we’ve gone down the rabbit hole here, but this is gold if you can grasp the idea.)

In summing up, letting go of guilt becomes automatic when we realize our innate limitations. When we realize that we don’t make mistakes on purpose but simply don’t know any better. Accepting our limitations with humility brings forgiveness and compassion for ourselves, which then allows us to get back on our feet and try again.

(Note: These thoughts are based on David R. Hawkins’ teaching on guilt. If they resonate with you, I highly recommend reading Hawkins’ chapter on guilt in Transcending the Levels of Consciousness.)

Procrastination (and self-discipline in general) is largely a matter of emotion regulation or emotional intelligence. In this regard, both terms essentially mean the same thing – to manage our emotions so that they align with our higher values, morals, and intentions as best as possible. It’s about preventing negative emotions from driving our behavior.

Guilt, of course, is one of those negative emotions that tend to drive our behavior. It pushes us into avoidance, into numbing ourselves, into hurting our loved-ones, and so on.

The key to overcoming procrastination (guilt-related or not) in the long run, is to strengthen our emotion regulation skills. This means learning to more often do what we want to do, as opposed to what anger, fear, guilt, and other negative emotions urge us to do.

Strengthening these crucial skills can be done through meditation, physical exercise, self-awareness, mindfulness, reading books on willpower, or simply learning more about emotions, like you’re doing by reading this article.

And there you have it, my best strategies for letting go of guilt.

Now I’d love to hear your thoughts and experiences on guilt and procrastination. Are you also struggling with these issues? Do my explanations make sense? Are they helpful?

Please leave a comment below and let me know.

Oh, and if you want to learn more strategies to become more productive and disciplined, check out Procrastinator to Producer.