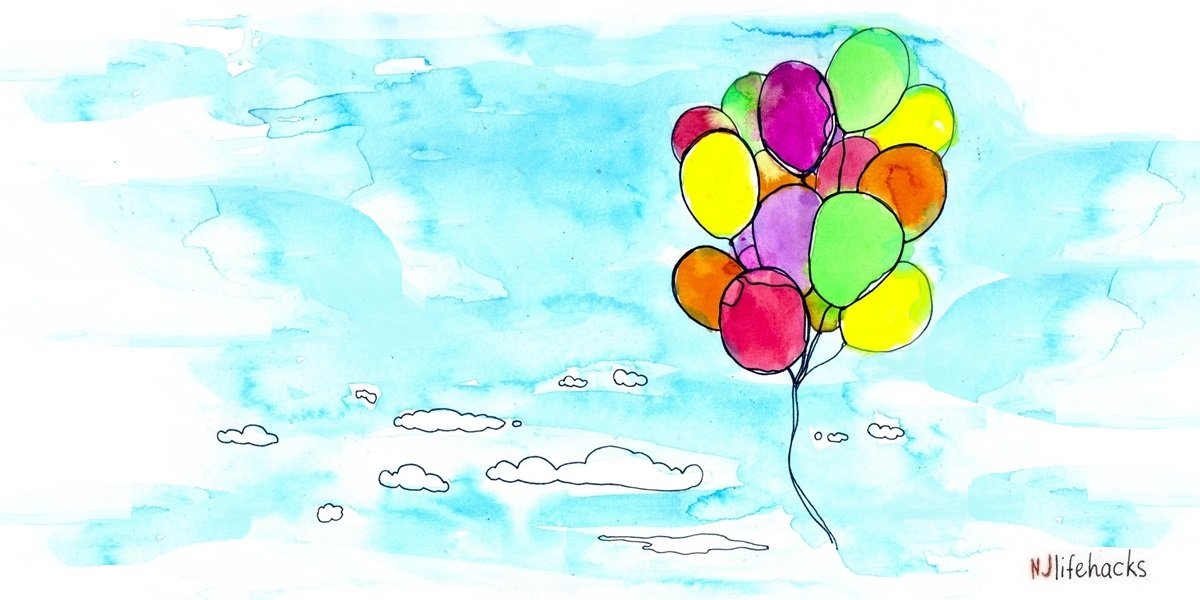 Benefits of Happiness: 5 Reasons to Start Prioritizing Being Happy Today

NOTE: This is an excerpt from my upcoming book The Happy Life Formula, which will officially launch on Amazon on Monday,12th of March. Make sure you're on our newsletter list to get notified when the book's on sale.

It’s odd to talk about happiness in terms of benefits, isn’t it?

After all, the benefit of happiness is obvious: it’s happiness itself — the experience of joy, contentment, or positive well-being, combined with a sense that one’s life is good, meaningful, and worthwhile.

Still, it turns out that happiness offers even more than the primary benefit of being happy itself. According to the research, happiness improves many other aspects of life, which we'll discuss in this article.

The Benefits of Happiness: An Overview

Here’s an overview of some of the secondary benefits happiness has been linked to:

Robert Emmons, a leading researcher in the field of gratitude, sums up the benefits nicely in his book Thanks!:

Let’s consider five of the specific benefits in more detail.

Consider a study which measured people’s initial level of happiness, and then followed their job performance for the next 18 months. Even after controlling for other factors, people who were happier at the beginning received higher pay and better evaluations later on.

A similar study measured college freshmen’s happiness levels. 19 years later, it predicted how high their income was, regardless of their initial financial situation.

Happy workers, in general, are more productive, perform more effectively as leaders, generate more sales, take fewer days off due to sickness, and receive higher pay and higher performance ratings across the board.

One of the most famous happiness studies includes the diaries of 180 Catholic nuns born before 1917. More than five decades later, researchers looked at those diary entries and coded them for positive emotional content.

The results were startling. The higher the level of positivity as 20-somethings, the longer these nuns tended to live.

By age 85, 90% of the happiest quartile of nuns were still alive, as opposed to only 34% of the least happy quartile.

Happiness is good for your health. Other studies have shown that it predicts lower heart rate and blood pressure. It combats stress, boosts your immune system, and protects you from aches and pains.

Consider an experiment which exposed 350 adults to the common cold. Before exposure, researchers called them six times over a two-week period and asked how often they had experienced nine positive emotions (e.g., feeling calm, pleased, or energetic) that day.

A week after getting injected with the virus, the individuals who experienced more positive emotions in the weeks leading up to the experiment fought off the virus a lot better than their less happy peers. Not only did they feel better, they experienced fewer symptoms, such as coughing, sneezing, or congestion.

An experiment I found even more fascinating revealed that immune system activity in the same person fluctuates depending on their happiness. For two months, 30 dental students took pills containing harmless blood protein from rabbits, causing an immune response in humans. Participants rated their happiness by indicating whether they had experienced various positive emotions that day. On days when they were happier, the students had a better immune response, as measured by the presence of an antibody that defends against foreign substances.

3. Happiness is Perhaps the Best Antidote to Stress and Anxiety

Imagine you’ve just volunteered to participate in a study of emotions and cardiovascular reactivity. You visit the lab, are told to sit down in a comfortable chair, then get hooked up with tiny sensors on your skin to measure moment-to-moment changes in your heart rate, blood pressure, and the constriction of your blood vessels.

So far it’s a strange and unfamiliar situation, but no big deal, right? Well, that changes the moment the researchers tell you about your assignment: Prepare a speech on “Why you are a good friend.” We will videotape the speech and you’ll be evaluated by the other participants.

Your heart rate shoots up. Blood pressure rises. Veins and arteries constrict. In other words, you’re anxious and stressed.

Next, you’re being told that if “by chance” you’re shown a film clip during preparing your speech, it means “the computer” has placed you in the “no speech” condition. Put differently, the start of the film signals that you’re off the hook for delivering the dreaded speech.

In reality, all participants were shown a film clip. The real experiment was to see how different film clips — two of which induced positive emotions, one negative emotions, and one neutral emotions — impacted recovery from the stress.

The very moment the film clip started, researchers began tracking the effects different emotions had on recovery. They tracked how long it took for each person’s cardiovascular reactions to return to their baseline resting levels, which were measured when they were sitting in that comfy chair.

Some hearts quelled within a few seconds, while others took more than a minute to calm down. What made the difference? Participants who watched one of the positive clips had the fastest recovery from stress and anxiety. Those who saw either the negative or neutral clips experienced the slowest recovery.

Happiness makes you resilient. It helps you recover from stress.

Barbara Fredrickson, one of the researchers of this study, has called this the “undo effect.” Happiness can quell or “undo” the negative aftereffects of stress, anxiety, depression, or negativity in general.

Next time you’re feeling stressed, find something to be positive about. Remind yourself of your family, call a friend, or watch a short clip of your favorite comedy show. If someone you love is stressed, don’t pile on the pressure be reminding them of the high stakes they face. Instead, give them the gift of positivity. Remind them of their strengths, friends and family who love them, or an upcoming event they’re anticipating.

4. Happiness Primes You to Perform at Your Best

One experiment asked four-year-olds to complete a series of learning tasks, such as putting together blocks of different shapes. One group was told to put together the blocks as quickly as possible. The other group was given the same instructions, but were told to first think of something that makes them happy.

The results? Children “primed” — meaning researchers evoked a certain emotion or mindset before an experiment — for happiness significantly outperformed the other kids, completing the tasks faster and with fewer errors.

Another experiment yielded even more impressive results. A common med school exercise for doctors in training is to make a diagnosis based on a rundown of a patient’s symptoms and history. If you’ve ever watched the TV series House, M.D., you know what we’re talking about here.

In this experiment, the doctors in training were put into three groups. One group was primed to feel happy before making the diagnosis. Another was asked to read neutral material, and a control group wasn’t given any special instructions prior to the exercise.

The happiness-primed doctors ended up being twice as fast at making the right diagnosis compared to the other groups. They were also less likely to fall prey to something called anchoring — a phenomenon that occurs when a doc has trouble letting go of an initial diagnosis (the anchor point), even in the face of updated information that contradicts the initial diagnosis.

Priming the brain for happiness doesn’t just work for kids and doctors. Another study showed that students who were told to think about the happiest day of their lives before taking a math test outperformed their peers. And people who expressed more positivity while negotiating business deals did so more effectively than those expressing more neutral or negative emotions.

The message is clear: Sacrificing happiness for success will result in, well, less success. Instead, why not capitalize on happiness and bring about more success that way?

Don’t even worry about happiness right now. First, become a success, and then happiness will follow.

Keep chasing after success, and once you’ve made it, then you’ll be happy.

But don’t try to be happy right now! That’s futile, if you’re not yet successful enough. First, you need to work hard, sacrifice your health and friendships, and then you’ll automatically be happy.

Don’t worry about happiness; double down on becoming a success instead.

The only problem with that model? It’s broken.

There’s always more success to be chased after. More money, more fame, more power — it never ends. Once you get your promotion, you’ll set sail for another goal. Once you achieve that goal, another one follows. Most of us pursue one unfulfilling goal after another, hoping success finally comes with accomplishing the next one. Before we know it, life has passed us by and we’re no happier than before.

Even if we “make it” and become out-of-this-world successful, what then? That’s the fate of drug-addicted Hollywood stars and grumpy millionaires — not exactly role models of flourishing and happiness.

More importantly, though, the formula is broken because it’s backwards. As you’ve just learned, happiness fuels performance like nothing else. By sacrificing happiness, we limit our own potential for success.

Shawn Achor, a leading happiness researcher, describes the relationship between happiness and success perfectly in his book The Happiness Advantage:

“It turns out that our brains are literally hardwired to perform at their best not when they are negative or even neutral, but when they are positive. Yet in today’s world, we ironically sacrifice happiness for success only to lower our brain’s success rates…

When we are happy — when our mindset and mood are positive — we are smarter, more motivated, and thus more successful. Happiness is the center, and success revolves around it.”

It’s an odd situation — the less happy we are, the less likely we are to get the thing (success) we expect to bring us happiness.

Obviously, that achieves your first goal. And because happiness is a sort of precursor to success, you’ll also be more likely to achieve the second goal. BINGO!

Happiness brings you everything you want.

The point is, stop delaying happiness. Actively and deliberately work on becoming happier now. Not only will it make you happy, but it will make you a success too.

Happiness doesn’t just come with the benefit of happiness itself.

Sure, the experience of joy, contentment, or positive well-being, combined with a sense that one’s life is good, meaningful, and worthwhile, is all we could ever ask for.

But the benefits spread wider. Happiness, it turns out, is a necessary ingredient in living a healthy and successful life.

Is it really possible to generate more happiness on demand? Absolutely. With our brand new free guide, The Happiness Toolkit, you’ll discover a set of 67 science-based mini-practices proven to boost your levels of happiness.

Just pick a practice, follow the instructions, and voilà: feel happier on demand. Download the free PDF by clicking the link below:

The Happiness Toolkit - 67 Science-Based Ways to Raise Your Happiness »