4 Steps to Getting Anything You Want in Life - NJlifehacks 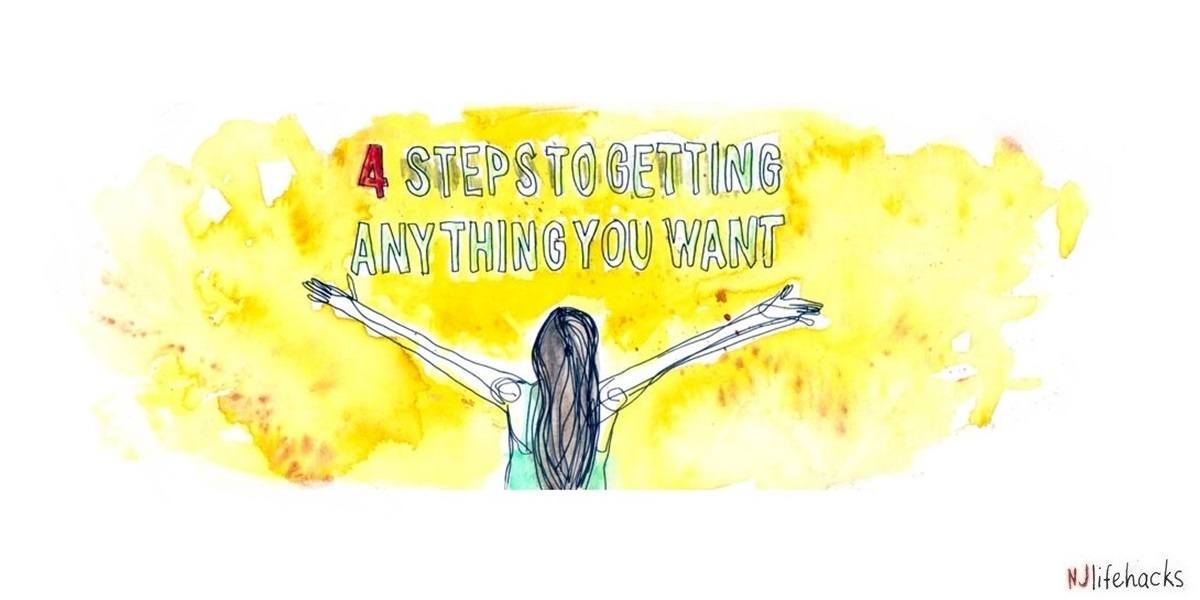 4 Steps to Getting Anything You Want in Life

It is in the nature of human beings to want things – to desire appreciation, good health, better feelings, kids, a loving spouse, good relationships, peaceful sleep, maybe a beautiful home, a respectable career, or the freedom to travel the world.

There’s no denying it. Unless you’re an enlightened being or are willing to meditate for decades or find another way to transcend this wanting, your life satisfaction will strongly depend on your ability to get what you want.

So, how do you make it happen? How do you get from where you are to where you want to be?

While entire books have been written on this topic, we will boil it down to four basic steps in this article.

1. Get Clear on What You Want

“By the time I went into the Army I had two things settled: I knew who I wanted to marry, and I knew what I wanted to do for a living – retailing.” These are the words of Sam Walton, founder of Wal-Mart and the richest person in the United States from 1982 to 1988.

Most people go through life never knowing what they really want. We simply never take the time to figure it out. We go through school and take the path of least resistance. We just do what society tells us to do – go to college, find a decent job, get married, make kids, and that’s basically it. We never ask the hard questions. And because we never do, we live a kind of lukewarm life, going through the motions without real enthusiasm, without excitement, without true hope and optimism, and without jumping out of bed in the morning.

Napoleon Hill writes in Think and Grow Rich: “I wish to convey the thought that all achievement, no matter what may be its true nature or its purpose, must begin with an intense, BURNING DESIRE for something definite.”

The stronger your desire, the harder you’ll work for it and the more likely you are to make it happen. So, figure out what you really want, what gets you fired up, what excites you, what gets you out of bed in the morning. Getting clear on what you want is the first step.

(If you’re ready to gain more clarity, click here to download a free PDF with 3 potentially life-changing questions that will help you generate that all-important clarity. No email required.)

2. Figure Out How to Get There

Once you know what you want, it’s time to create a plan to get there. As the French poet Antoine de Saint-Exupery once said, “A goal without a plan is just a wish.”

The exciting part is that anything we want, someone else has probably already made it happen and we can, for the most part, just copy what they did. We can read books, go to conferences, or get a mentor. With this new knowledge, we can then create a first plan and go about working that plan. Of course, as we learn more and more about life and the way things work on this planet, we continually adjust and fine-tune the plan.

So, this is the second step – charting a plan of action and taking the first step.

As soon as the simplest of plans is ready, it’s time to take massive action. “If we wait until we are absolutely certain and sure before we act we will never do anything,” writes Maxwell Maltz in his bestselling Psycho-Cybernetics.

We need to take imperfect action. We need to implement quickly. Apply what we learn. Get our feet wet. And adjust according to the feedback we’re receiving.

Of course, we shouldn’t act like headless chicken. Prioritizing via the 80/20 Principle is important. We want to focus our time and energy on the actions that will truly move the needle. We also want to stop doing the things that hold us back or move us in the wrong direction, such as watching too much television or staring into our smartphone all day long. The good news is, once you have a strong enough desire, you’ll automatically find yourself wasting less time. In any case, the third step is to take massive action toward our goal.

The fourth step to reaching anything you want is to stay persistent. We can’t just give up at the first sight of defeat, and instead must realize that failures are part of any journey of growth. If you’re looking for the one door to success out of a hundred, you’re closer to success after opening 50 wrong doors than opening one wrong door and then giving up.

Napoleon Hill puts it like this: “Those who have cultivated the habit of persistence seem to enjoy insurance against failure. No matter how many times they are defeated, they finally arrive up toward the top of the ladder.”

“Sometimes it appears that there is a hidden Guide whose duty is to test men through all sorts of discouraging experiences. Those who pick themselves up after defeat and keep on trying, arrive; and the world cries, “Bravo! I knew you could do it!” The hidden Guide lets no one enjoy great achievement without passing the persistence test. Those who can’t take it, simply do not make the grade.”

Jerry Weintraub offers a great example. He has represented, promoted, or worked with hundreds of singers, bands, actors, directors, and writers over the last five decades.  The long, long list of the singers and bands he has promoted includes Bob Dylan, Elton John, Elvis Presley, Frank Sinatra, Aerosmith, and Led Zeppelin. He also produced 22 films including the Ocean's Trilogy (Ocean's Eleven/Ocean's Twelve/Ocean's Thirteen) that has grossed more than 1.1 billion dollars.

In 1962, at age 25, Jerry Weintraub decided that he wanted to take Elvis Presley, then the biggest star in the world, on tour across America.  He called Elvis Presley's manager, Colonel Tom Parker, every day to ask if he could take Elvis on tour.

So, what are you waiting for? Start by figuring out what you really want from life, what kind of person you want to become, what legacy you want to create, and what you want to be remembered for.

Here’s a free PDF with three questions that will give you a clarity you may have never experienced in your life before (no email required).

And if you want to accelerate things a bit, check out our brand new course, Procrastinator to Producer – it will show you how to get organized, become more productive, build self-discipline, and overcome the dillydallying that is likely holding you back from achieving what you want.

If you enjoy the course, great. And if not, just ask for a refund and we’ll gladly return your money. No big deal.

We’d love to see you join, so just give it a try. What have you got to lose?

Here’s where you can join us.