I Feel Like Shit Sometimes, And It’s OK - NJlifehacks 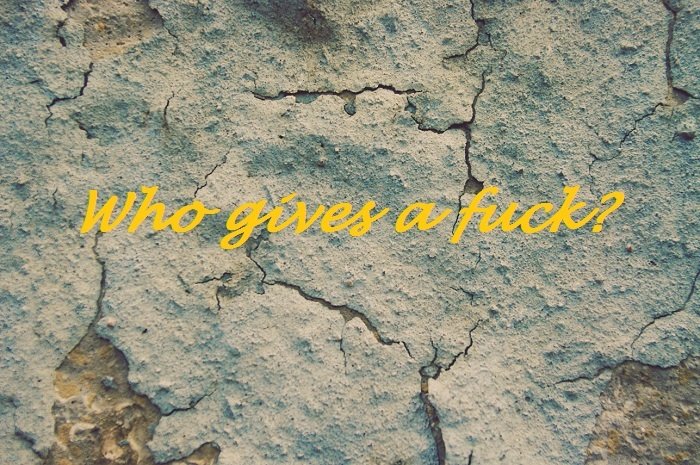 Lately I read Mark Manson’s book The Subtle Art of not Giving a Fuck. Great read!

One thing that really inspired me was his Feedback Loop from Hell. I know, badass name. So today you’ll learn why you actually should give a fuck about this. It’s quite interesting.

*Caution, there’s a lot of swearing in this post.

“There’s an insidious quirk to your brain that, if you let it, can drive you absolutely batty.”

“Let’s say you have an anger problem. You get pissed off at the stupidest, most inane stuff, and you have no idea why. And the fact that you get pissed off so easily starts to piss you off even more. And then, in your petty rage, you realize that being angry all the time makes you a shallow and mean person, and you hate this; you hate it so much that you get angry at yourself. Now look at you: you’re angry at yourself getting angry about being angry. Fuck you, wall. Here, have a fist.”

Who hasn’t been there or has at least witnessed a similar situation?

Welcome to the Feedback Loop from Hell.

Let me tell you an example from my last holiday in the Swedish wilderness with my brothers. I sometimes observed myself losing my calm (there was quite some provocation going on). And as I realized it, I lost my calm about losing my calm. It’s not that I flew into a rage. But observing me losing my calm triggered something in me. Probably because I’ve seen myself as a calm person and also because I was reading Eckhart Tolle’s A New Earth at the time and therefore wanted to be a calm person. So when I observed that I’m not acting how I wanted to act made me first of all realize that I’m not where I want to be (feedback) and also it made me feel worse about myself. That’s a classic case of the feedback loop from hell. What’s positive was the observing in the first place. That’s how you can improve yourself.

Another example: We all have this friend who’s scared of talking to the hot blonde at the bar. And when he realizes he either has got a great excuse (nah, she’s not thaat hot) or he gets anxious about being anxious (Damn, I really shit my pants for no reason. I’m such a scaredy pants. But why?).

Point is, we all do that. The Feedback Loop from Hell.

“Now here’s the problem: Our society today, through the wonders of consumer culture and hey-look-my-life-is-cooler-than-yours social media, has bred a whole generation of people who believe that having these negative experiences -- anxiety, fear, guilt, etc. -- is totally not okay.”

It’s okay to feel like shit sometimes. And, we shouldn’t make ourselves feel even shittier just for feeling like shit.

Just because everybody’s only posting their happy experiences on Facebook doesn’t mean that’s always the case. (Lately I stumbled upon this funny Unilad video ‘Instagram vs reality’ which shows this bluntly.)

The feedback loop from hell makes us overly stressed, neurotic and self-loathing. We don’t like ourselves. We’re unhappy with ourselves being unhappy instead of just accepting that it’s okay to feel that way sometimes. (Check out Nils’ article to learn about the negative effects of self-criticism.)

Sure, it sucks when you wake up feeling depressed. But it sucks even more and makes things worse when you blame yourself for feeling that way. It’s better to admit that you’re feeling that way and say it’s okay.

Right now, I feel like a fart. But it’s fine.

“Back in Grandpa’s day, he would feel like shit and think to himself, ‘Gee whiz, I sure do feel like a cow turd today. But hey, I guess that’s just life. Back to shoveling hay.’”

“By not giving a fuck that you feel bad, you short-circuit the feedback loop from hell; you say to yourself, ‘I feel like shit, but who gives a fuck?’ And then, as if sprinkled by magic fuck-giving fairy dust, you stop hating yourself for feeling so bad.” The Feedback Loop from Hell broken simply by asking yourself, "Who gives a fuck?"

Simple: Don’t give a fuck when you’re not feeling great. Because it’s ok.

Mark Manson argues that we have way too much stuff so that we don’t even know what to give a fuck about anymore. In our social media world there are uncountable ways to find out that we don’t measure up, that we’re not good enough, and that things aren’t as great as they could be. And this rips us apart inside.

We give way too many fucks about the things we don’t have.

“Look, this is how it works. You’re going to die one day. I know that’s kind of obvious, but I just wanted to remind you in case you’d forgotten. You and everyone you know are going to be dead soon. And in the short amount of time between here and there, you have a limited amount of fucks to give. Very few, in fact. And if you go around giving a fuck about everything and everyone without conscious thought or choice – well, then you’re going to get fucked.”

“There is a subtle art to not giving a fuck. And though the concept may sound ridiculous and I may sound like an asshole, what I’m talking about here is essentially learning how to focus and prioritize your thoughts effectively – how to pick and choose what matters to you and what does not matter to you based on finely honed personal values. This is incredibly difficult. It takes a lifetime of practice and discipline to achieve it. And you will regularly fail. But it is perhaps the most worthy struggle one can undertake in one’s life. It is perhaps the only struggle in one’s life.”

“The problem with people who hand out fucks like ice cream at a goddamn summer camp is that they don’t have anything more fuck-worthy to dedicate their fucks to.”

We don’t control everything out there. But you can control what to actually give a fuck about. Choose your fucks wisely.

In terms of the Feedback Loop from Hell that means that it’s completely fine that things suck sometimes. Just don’t give too many fucks about it because it will only make things worse. In many cases it’s probably best not to give a fuck about something in the first place, but when you catch yourself doing it, it’s ok. Let it be.

For example, when you catch yourself getting pissed off about the slow driver in front of you, don’t get even more pissed off just because you got pissed off in the first place.

We must realize that things suck sometimes, some more and some less. When you get comfortable with the idea that life sometimes throws shit in your face, you get what Mark Manson calls ‘practically enlightened’.

All this doesn’t mean to let go of everything and not giving a fuck about anything. There are still many things you should actually care about. And give a fuck about. You know, the most important things in your life. Your family and friends. The environment. You. The things you love. Whatever that may be.

Do with that whatever the fuck you wanna do.