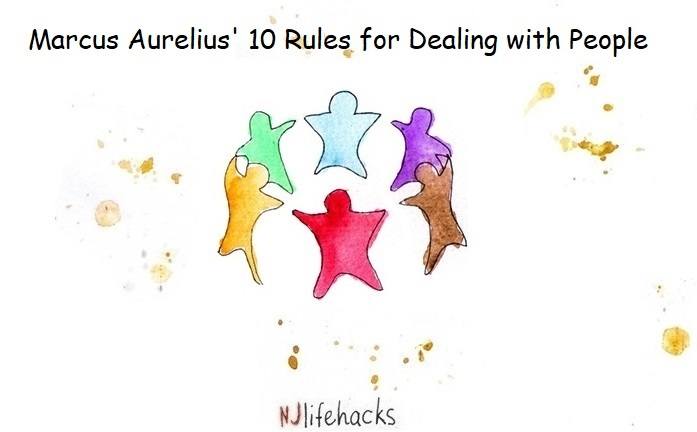 Stoicism is not only a rational, but also a social philosophy.

Marcus Aurelius often viewed the whole of human mankind as a single organism. Not only as a large human family, in which we’re all brothers and sister, uncles and aunts, but as a single living being, in which we all play an important role. Such as each limb and organ plays a vital role in our own organism.

“Since you yourself are one of the parts that serve to perfect a social system, let your every action contribute to the perfecting of social life.”  – Marcus Aurelius, Meditations, 9.23

As a social creature and as a limb of the whole organism of mankind, we’re meant to direct our every action to the common welfare. Because, as Marcus told himself, “What brings no benefit to the hive brings none to the bee.” (Meditations, 6.54)

Now, this is easy doing when life is running smoothly. When we’re feeling like on top of the world, when we’re overflowing with contentment and love, then we’ll naturally be acting for the common good. In that very moment, no remark or challenging situation can cause us to be mean or act against our highest values.

But life doesn’t always seem to run so smoothly. Life constantly offers us new challenges, often in the form of somewhat annoying people. Whether these people are actually annoying or only seem so to us, doesn’t really matter. Fact is, right now, we’re annoyed by this person. Maybe it has to do with ourselves, because we are tired, had a fight with our partner, or we’re just not at our best. Maybe it has to do with the other person, as he’s not at his best.

The question is, how can we deal effectively with such a situation in the form of a challenging interaction with another human being?

Stoicism offers countless strategies for dealing with other people. Today, we’ll look at the ten rules Marcus Aurelius wrote down to himself. In his Meditations, they are found in book eleven, section eighteen. (Meditations, 11.18.1-11)

Marcus reflects on his relation to other people. He was born to be their leader as an emperor, “as a ram leads his flock and the bull his herd.”

We’re meant to act according to nature, all in the interest of each other.

Look at the behavior of other people and ask yourself, “which opinions led to their behaviors?”

Why does a person act as she does? What’s her perception that led to this behavior? Can you put yourself in her shoes?

3. “If what they do is right, no cause for complaint. If wrong, this is clearly out of ignorance and not their wish.”

People do wrong because they don’t know any better. And “no soul likes to be robbed of truth.”

Nobody errs on purpose.

4. “You yourself have many faults and are no different from them.”

Philosophy is here to find our own faults. And we have plenty of them. Marcus adds, that even if we refrain from some wrongs, we probably do it out of fear of public opinion, which is a poor motive.

5. “You are not even sure that they are doing wrong.”

Who are we to judge? We don’t know the future, we don’t know their exact plans. “Generally one needs to know a great deal before one can pronounce with certainty on another’s actions.”

6. “When you are high in indignation and perhaps losing patience, remember that human life is a mere fragment of time and shortly we are all in our graves.”

Sometimes this perspective can help us take things less seriously. When we zoom out in time and space, we might realize that we are a mere drop in the ocean. Yet still a vital part of it 🙂

7. “It is not their actions which trouble us – because these lie in their own directing minds – but our judgments of them.”

Classic Stoic wisdom: It’s not what happens that harms us, but our judgment of what happens. If we can remove these judgments, Marcus adds, our anger will be gone.

When we react angrily and smash a glass, this reaction will be cause of greater pain than the very thing that caused the anger-reaction. Whether it’s a smashed glass, a mean remark to our colleague, or shouting at our kids, our reaction will often cause us more harm than the original incident.

Solution? Step back from the initial impression, remember that we’re likely to overreact because of our emotions in the heat of the moment, and choose a smarter response.

9. “Kindness is invincible – if it is sincere, not fawning or pretense.”

“What can the most aggressive man do to you if you continue to be kind to him,” Marcus asks himself. If the opportunity arises, we should re-educate this man, “No, son, we were born for other purposes than this. There is no way that I can be harmed, but you are harming yourself, son.” Neither bees nor any other social creatures act like this, he’d explain further.

Okay, I’m not sure whether calling an aggressor “son” will ever be a good idea, unless, it is your son. Marcus clearly states that the advice should not be ironic or critical. “It should be affectionate, with no hurt feelings, not a lecture or a demonstration to impress others.”

10. “It is madness to expect bad men to do no wrong: that is asking for the impossible.”

“But it is cruel tyranny,” he adds, “to allow them such behavior to others while demanding that they do no wrong to you.”

Maybe we can try to help others if they’re treated in a way we don’t want to be treated ourselves.

These are Marcus’ ten rules he wrote to himself to remind him to be a human being as long as his life remains.

Certainly these are valuable strategies in present times.

The biggest challenge, however, is awareness in the present moment. It’s in these situations when we need it most. Oftentimes, another person’s commentary will make our ego feel attacked. And suddenly we’re no longer the calm person we imagine ourselves to be, but we’re in reactive mode and, if we don’t pay attention, will do or say something that adds fuel to the fire. Or actually starts the fire.

Think of a situation when you tried to tell your friend, partner, or colleague something critically. Maybe you find some of their behavior annoying and want to let them know. So that you can live together in greater harmony.

Even if you try your best to say it calmly and fairly, there’s a certain risk that the other will be offended. People take things personally, feel attacked, and react enervated. Chances are that we do the same.

What we need most in these kinds of situations is a certain awareness in the present moment. So that we can observe our upcoming thoughts and emotions, and test them before we act on them. Only then can we respond consciously and in accordance with our highest values. Only then can we actively use Marcus’ strategies.

What works best for me to be more mindful throughout the day is personal reflection in the evening.

It’s what Marcus did when he wrote in his diary. He wanted to have this thought ready whenever anger arose within, “there is nothing manly in being angry, but a gentle calm is both more human and therefore more virile.”

Attention: This isn’t about suppressing or bottling our emotions, it’s about recognizing them, maybe even expressing them verbally, but never acting on them.

There’s nothing wrong with feeling anger. It’s here already, and that’s okay. We acknowledge and accept our feelings, and then act according to our values rather than our feelings.

With practice, you will see the feeling with some distance. The feeling is there, within you, but you are not that feeling. You are the presence that’s noticing and observing the feeling. And you can choose for yourself how you want to respond to the situation.

So that you can say to yourself in the heat of the moment, “Hello anger 🙂 Right now, you are a feeling within me, I have seen and recognized and accepted you. It’s okay that you’re here. But it’s me who makes the decisions on how to act. I choose to respond in a mature way and treat others with respect and kindness.”

Next time when you get angry in a situation, can you notice the arising feeling, greet it, and maybe channel this energy into something more helpful?

Or, can you even stop yourself from getting angry in the first place?

Which of Marcus’ strategies helps you most with that? Let me know in the comments below 🙂

Now, let’s offer the last words to our Stoic teacher:

“It is the gentle who have strength, sinew, and courage – not the indignant or complaining. The closer to control of emotion, the closer to power. Anger is as much a sign of weakness as is pain. Both have been wounded, and have surrendered.”