The Rise of Media Multitasking: What Blasting Yourself With Multiple Media Streams is Doing to Your Brain - NJlifehacks 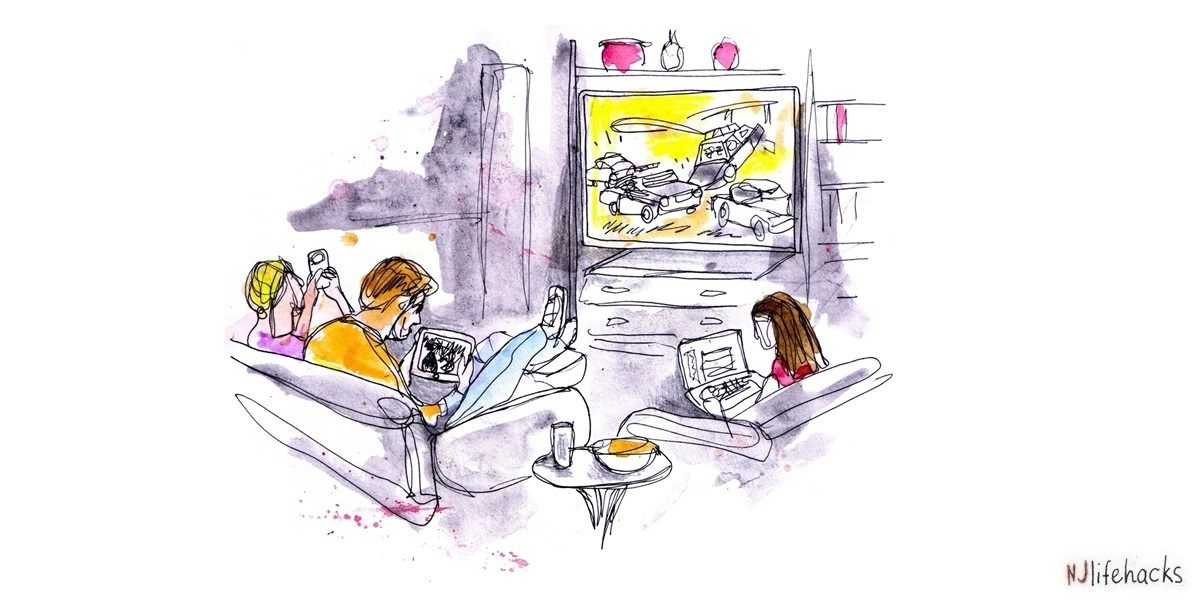 The Rise of Media Multitasking: What Blasting Yourself With Multiple Media Streams is Doing to Your Brain

The time of consuming one medium at a time is over. We’re no longer just reading a book, just watching television, or just listening to our favorite tunes. We now watch television while browsing the Web. We answer emails while listening to music. We are “watching” a YouTube video in one tab, while instant messaging in another.

This behavior is called media multitasking, defined as the simultaneous use of two or more media streams, and it’s very common these days.

A Deloitte study showed that 81% of Americans across generations almost always or always engage in at least one additional activity while watching television; for young adults this figure approaches nearly 90%. Another study found that when 200 people were asked to track their media activities during a one-hour evening period, they reported switching between tablets, laptops, and mobile phones 21 times, and 95% of them did this with the television on for the entire hour.

Researchers have been studying the effects of media multitasking for a while now, and their findings are shocking. If you’ve ever wondered what the simultaneous use of multiple media is doing to your brain, read on.

Neuroplasticity refers to the brain’s ability to change itself. Wikipedia defines it as “the ability of the brain to change throughout an individual's life, e.g., brain activity associated with a given function can be transferred to a different location, the proportion of grey matter can change, and synapses may strengthen or weaken over time.”

Every experience you have, physical or mental, changes your brain. Some scientists talk about experience-dependent neuroplasticity – your brain changes according to your experiences.

This is a form of adaptability. You may remember Charles Darwin’s quote from your biology class: “It is not the strongest of the species that survives, nor the most intelligent. It is the one that is most adaptable to change.”

Just like the body adapts to changes in circumstances and behavior, so does the brain. The goal is the same in body and brain: To make changes that allow you to better handle whatever experience you’ve just had. It’s a marvelous mechanism, largely responsible for the success of our species. The reason we’ve survived and thrived for so long is our adaptability. The human machine is good at changing itself, at learning new skills, at adapting to new circumstances.

And just like muscles, the brain follows the principle of “use it or lose it.” While the brain will build new and stronger circuits through mental or physical practice, those circuits will weaken or dissolve with neglect. If you stop using certain skills, the relevant neural circuits and connections will literally weaken, just as a bicep weakens when you stop using it. Jeffrey Schwartz, a professor at UCLA’s medical school, referred to this process as “survival of the busiest.”

Consider some real world examples. In one study, it was shown that London taxi drivers have larger hippocampi (a brain region) than London bus drivers. This is because that particular brain region is associated with acquiring and using complex spatial information in order to navigate effectively. While taxi drivers use, and thus train, this neural circuit often, bus drivers who follow the same routes every day don’t. Hence, the hippocampus grows in taxi drivers and not in bus drivers – use it or lose it.

Other studies show that professional musicians have more gray matter volume in several brain areas involved in playing music, as compared to non-musicians. Bilinguals have a larger left interior parietal cortex than monolinguals. Long-term meditators have bigger pre-frontal cortexes than non-meditators. In one study, the longer someone had worked as a mathematician, the more gray matter he or she had in the right inferior parietal lobule.

Don’t get bogged down by the weird names of these brain regions. The point is simply this: Your brain changes itself according to your environment and behavior, and these changes are permanently embedded in the physical structures of your brain.

We now return to our original question: How does media multitasking, blasting yourself with multiple media streams simultaneously, change your brain?

Given our brain’s plasticity, we know that everyday behavior changes the structure of our brains. Media multitasking will cause some neural circuits and their related skills to strengthen and others to weaken. There’s no doubt about that. But what exactly are the “skills” involved in media multitasking? What changes to our brains do we have to fear or can look forward to?

The first study investigating this question was published in 2009. Researchers divided a group of people into heavy media multitaskers and light media multitaskers, and compared their results on a variety of cognitive tests. The study found that heavy media multitaskers had less control over the contents of their working memory, were more easily distracted by irrelevant stimuli, and were less able to maintain their concentration on any given task.

The researchers’ comments were eye-opening. Clifford Nass referred to heavy multitaskers as “suckers for irrelevancy,” and added that “everything distracts them.” Anthony Wagner said, “When they’re in situations where there are multiple sources of information coming from the external world or emerging out of memory, they’re not able to filter out what’s not relevant to their current goal. That failure to filter means they’re slowed down by that irrelevant information.” Lastly, Eyal Ophir added, “They couldn’t help thinking about the task they weren’t doing. The high multitaskers are always drawing from all the information in front of them. They can’t keep things separate in their minds.”

Michael Merzenich, one of the pioneers of neuroplasticity, offered an even bleaker assessment in an interview with Nicholas Carr. As we multitask online, he explains, we are “training our brains to pay attention to the crap.” The consequences for our intellectual lives may prove “deadly.”

Since that first study, others have followed. A 2017 study, aptly titled I Want to Media Multitask and I Want to Do it Now, does a nice job at summarizing the findings. (Note: HMMs are heavy media multitaskers; LMMs are light media multitaskers. I have removed the citations to make it easier to read.)

The authors write: “Previous studies have provided evidence that HMMs have increased self-reported mind-wandering and more everyday lapses of attention, less top-down goal-related attentional selectivity, greater self-reported impulsivity, reduced self-reported self-control, and, as observed here, an increased reliance on fast and automatic system-1 processing, and a reduced ability to delay gratification. We suggest that instead of proactively managing their approach to stimuli in the environment, HMMs may be more reactive – a pattern that has also been demonstrated in older-age participants, and which would be consistent with Loh and Kanai’s finding that HMMs have reduced gray-matter density in the anterior cingulate cortex relative to LMMs.”

Now, before freaking out completely, let’s make one thing clear. So far, these are only correlations, associations. No causation has been proved yet. It is possible (and very likely!) that individuals with greater impulsivity, higher distractibility, or reduced self-control are more likely to engage in media multitasking. It is also possible that frequent media multitasking creates the aforementioned changes (increased mind-wandering, more lapses of attention, etc.). Most likely, both are true.

The truth is, our plastic brains are constantly changing in response to our everyday habits. At this point, however, we don’t know yet what these changes will be in regard to media multitasking. Still, I find the studies scary enough, and I’ve reduced my media multitasking to an absolute minimum since learning about them.

If you’re not convinced yet that media multitasking is a bad idea, ask yourself this: Do you have trouble concentrating? Is your brain hungry for stimulation? Are you often distracted? Do you compulsively check your phone throughout the day? Do you have trouble focusing on just one thing at a time? Do you get bored easily when reading a book?

Face it: Modern technology has us hooked. And if we care about our most precious asset – our ability to focus on what we want, when we want, for however long we want – we must consider un-hooking ourselves. And we can start by going to consuming just one media stream at a time.