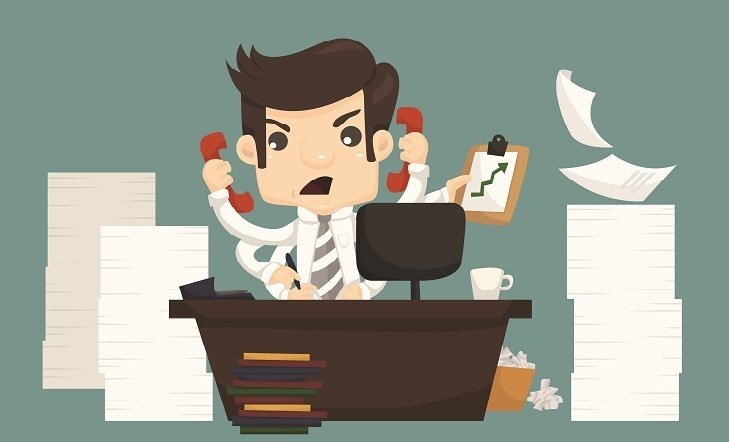 So you’ve probably heard that multitasking isn’t such a “good idea”.

It’s a downright TERRIBLE and even dangerous idea.

Did you know, for example, that multitasking can actually SHRINK your brain?

…or that it temporarily lowers your IQ?

…or that it DESTROYS your productivity?

…or that it creates unnecessary stress for your brain?

…or that it could literally KILL you?

No? You haven’t heard of that yet?

Well then it’s time to read this article and learn about the true costs of multitasking.

Let me show you 7 scientifically PROVEN reasons to ditch this habit right now.

What Is Multitasking Anyway? And Does It Even Exist? Multitasking, as we generally use this term, doesn’t really exist.

That does work (and is OK to do in certain situations) if the activities are easy and undemanding.

What does NOT work and is impossible to do, however, is to concentrate on two tasks at once. Instead what’s really happening in such situations is serial tasking.

Our brain simply switches back and forth super quickly from one task to another.

Instead we’re forcing our mind to quickly switch back and forth between the tasks (when we’re falsely thinking we’re multitasking).

And look, this would work just fine if our brain could seamlessly transition from one task to another, but it can’t. This stop/restart process during multitasking comes with some pretty big costs.

These costs are listed below and are the reasons why you want to ditch multitasking.

The first reason to ditch multitasking is simply time.

You see… every time your brain has to stop and restart, it loses a little bit of time.

So completing two tasks at once takes longer than completing one task after the other.

I've created this beautiful and grossly oversimplified image in word to demonstrate how switching costs add up to make you less productive.​

(Note: I've been very kind with the number of switches this person would make during multitasking. In reality, your mind is switching all the time during multitasking... not just every 10-20 minutes as I've pictured it above. Also, the time loss would be much greater than just about 4% in this example. Nevertheless I think it nicely illustrates why singletasking is superior to multitasking in terms of productivity.)

Researchers estimate that switching between tasks can cause a 40% productivity loss.

It’s like having a 3-day week instead of a 5-day week.

Seriously… that productivity loss should be reason enough.

But, I know… I’ve promised more reasons… so let’s check’ em out…

So they did a study to find out if people who often multitask perform better on certain tests than people who rarely multitask.

Here’s what they found:

People who are regularly bombarded with several streams of electronic information – the multitaskers – cannot pay attention, recall information, or switch from one job to another as well as those who usually complete one task at a time.

Heavy multitaskers — those who multitask a lot — perform worse at multitasking than those who prefer to do one thing at a time.

(Plus, their abilities to pay attention and remember things are also worse!)

The researchers concluded that heavy multitaskers had more trouble organizing their thoughts and filtering out irrelevant information. Plus, they were slower at switching from one task to another.

Multitaskers perform worse than singletaskers at about everything. Especially at focusing and recalling information (which by the way means that multitasking destroys your learning abilities).

Research suggests that multitasking on cognitive tasks is equivalent to an IQ drop of 15 points.

One study found that participants who multitasked during mental tasks experienced IQ score declines that were very similar to what they’d expect if they stayed up all night or had smoked marijuana.

When you’re multitasking on any mental task such as learning, reading, writing, etc. it’s like IMMEDIATELY dropping your IQ by 15 points. (That’s a LOT!)

4. Multitasking Stresses You Out

Trying to do many things at once is stressful. Period.

This study found that even after just 20 minutes of interruptions, people start to feel significantly more stress, frustration, and pressure.

When people are constantly getting interrupted, they start working faster because they think they’re not getting ahead as fast as they should. Worst of all, even if they’re working faster, they still produce less because they’re distracted all the time.

No wonder they’re stressed out.

Another example are people who constantly have to check their emails. Studies show that their heart rate and their levels of the stress hormone cortisol go up every time they check email.

Oh, and do you know what stress does to your brain?

5. Multitasking May Damage (and Even SHRINK) Your Brain

This study found that people who regularly multitask have lower brain density in the region of their brain responsible for empathy, emotional control, and cognitive control.

Multitasking may actually SHRINK your brain (!).

This would make sense because multitasking is kind of the opposite of what you’re doing during meditation. And meditation is of course PROVEN to increase the size of your brain.

(And yes, I get that the above study is correlation and not causation. However, I still think it’s highly likely that multitasking does actually damage the brain.)

First, it increases the number of mistakes you make as shown in this study. The researchers found that the subjects who were given three tasks to perform made three times (!) as many errors as those given only two tasks.

7. Multitasking May Literally Kill You

According to this article, distracted walking causes pedestrians to fall off bridges, get hit by cars, and stumble onto subway tracks.

Distracted walking causes pedestrians to fall off bridges, get hit by cars, and stumble onto subway tracks. (And yes, people have died because of that.)

According to a British motoring research charity, texting while driving decreases reaction time by 35% and reduces steering control by 91% (!).

This means that texting while driving is significantly MORE dangerous than driving while stoned or drunk. Whoops. It makes you less productive, stresses you out, lowers your work quality, temporarily lowers your IQ, and frankly is absolutely TERRIBLE for your brain.

So if we want to live a great life, achieve our goals, and be the best we can be…

So here’s the #1 way I’ve found to reduce your multitasking:

Focus on doing one thing. And stay focused on that one thing for as long as possible.

Try to do just one thing at any given time. And try doing it for long periods of time WITHOUT distractions.

This minimizes the number of stops and restarts you’re doing.

Here are a few examples:

This approach reduces your multitasking, increases your productivity, and most importantly:

It trains your attention muscle – your ability to focus on what you want, when you want, and for however long you want.

Ok then, let’s wrap this up…

Multitasking is a myth.

What’s really happening during “multitasking” is our brain switching back and forth super quickly from one task to another.

And this switching back and forth unfortunately comes with a cost which may result in a productivity loss of up to 40%.

And not only does multitasking lower our productivity, but it also comes with a hefty cost for our brain.

It temporarily lowers our IQ, stresses us out, damages our brain, increases the number of mistakes we make, lowers the quality of our work, and may ultimately kill us all.

So for your own good…

…STOP multitasking and start focusing on one thing at a time.