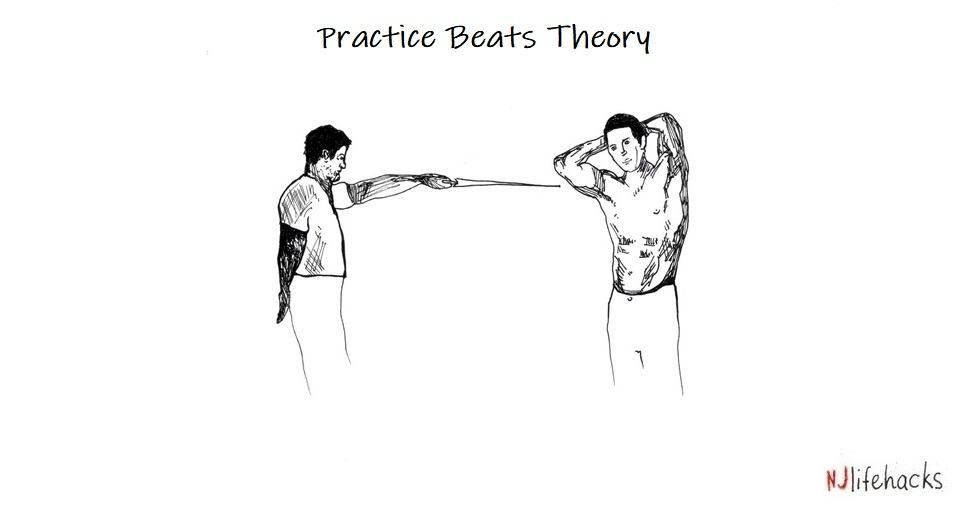 Stoic teacher Musonius Rufus thought practice to be more effective than theory. In support of his own opinion, he asked the following:

We’d all choose the experienced sailor.

The other might be a better salesman and can explain all things sailing. And he might not say that he’s never sailed a boat. Suddenly there is the danger that we actually choose the wrong man. Because the true pilot doesn’t say much and what he says doesn’t impress us.

But as soon as we know that one is an experienced sailor and the other a mere theorist, the choice becomes easy.

“How then would knowing the theory of a thing be better than practicing that theory and doing things in accordance with its guidelines?”

When it comes to philosophy, this is even more important.

It is pointless to learn about the art of living if we don’t apply it in everyday life.

“The person who claims to be studying philosophy must practice it even more diligently than the person who aspires to the art of medicine or a similar skill, inasmuch as philosophy is more important and harder to grasp than any other pursuit.”

Another reason is that if you study skills other than philosophy, you have not learned much about it before and are less prejudiced. With philosophy it’s different. You’ve been living already for a couple of years at least, and have learned and done things opposite to what you think to be right today.

With philosophy, we must unlearn and override old & faulty behavior patterns. This takes more effort than learning a new skill from scratch.

How, then, should we practice philosophy?

“Since a human being happens to be neither soul alone nor body alone, but a composite of these two things, someone in training must pay attention to both.”

We should pay more attention to the soul, he says, but as the soul’s righteous actions are often accompanied with physical activities, we need a strong body, too.

“We will train both soul and body when we accustom ourselves to cold, heat, thirst, hunger, scarcity of food, hardness of bed, abstaining from pleasures, and enduring pains.”

Ever heard of voluntary discomfort?

“Through these methods and others like them, the body is strengthened, becomes inured to suffering, and strong and fit for every task; the soul is strengthened as it is trained for courage by enduring hardships and trained for self-control by abstaining from pleasures.”

Once again it becomes clear that acute hardships can actually be good for us. “We gain every good from toil,” as Musonius said.

“In too many circumstances, we do not deal with our affairs in accordance with correct assumptions, but rather we follow thoughtless habit.”

“Since I say this is the case, the person who is practicing to become a philosopher must seek to overcome himself so that he won’t welcome pleasure and avoid pain, so that he won’t love living and fear death.”