The Myth of Natural Talent: What it Really Has to Do With Elite Performance 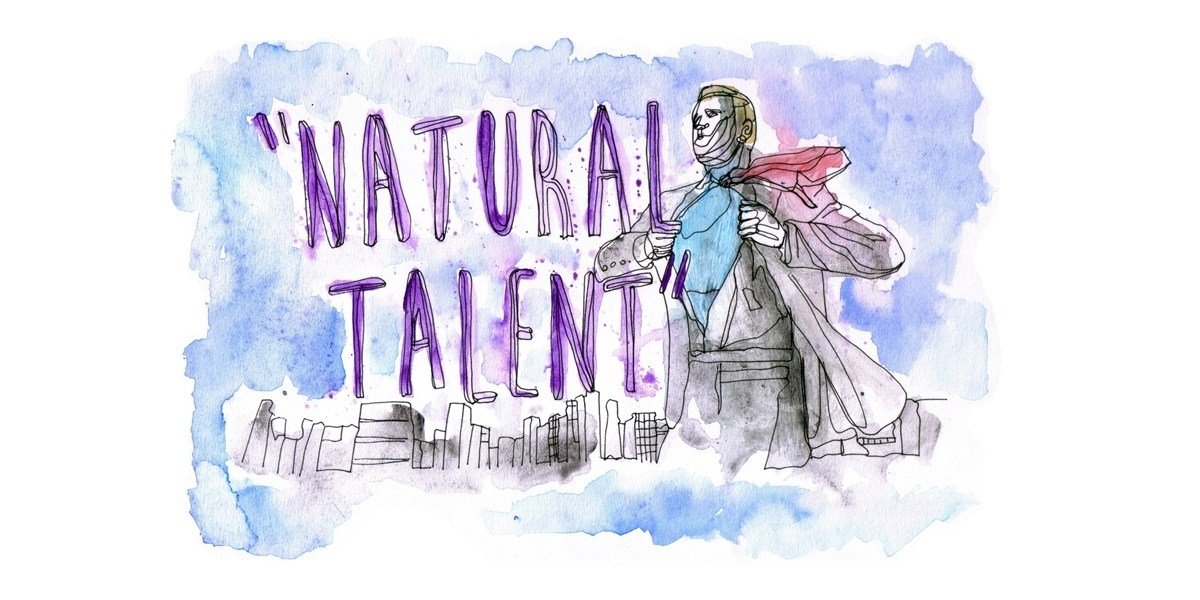 Sam Snead was one of the greatest golf players of all time. His success was attributed to natural talent; people literally called him the best natural player ever.

Snead himself didn’t agree. In an interview with Golf Digest, he said, “People always said I had a natural swing. They thought I wasn’t a hard worker. But when I was young, I’d play and practice all day, then practice more at night by my car’s headlights. My hands bled. Nobody worked harder at golf than I did.”

Greatness isn’t born; it’s made. It’s the story of hard work, not talent. That’s what we concluded in the previous two articles. (Here and here.)

Anders Ericsson, a leading researcher in the science of expertise, sums it up in Peak, “Expert performers develop their extraordinary abilities through years and years of dedicated practice, improving step by step in a long, laborious process. There are no shortcuts.”

This belief in natural talent – the idea of “naturals” who possess a “gift” that makes them different from the rest of us – is one of the most enduring convictions about human nature. It’s also deeply flawed.

The truth is, innate abilities and traits play a much smaller role than you would assume.

The Myth of Natural Prodigies

One reason why people believe in the myth of natural talent is the apparent existence of “natural prodigies” – people who display extraordinary skills with little or no training. Think: Mozart, Picasso, Bobby Fischer, or Tiger Woods.

In Peak, Anders Ericsson dispels this myth: “As it happens, I have made it a hobby to investigate the stories of such prodigies, and I can report with confidence that I have never found a convincing case for anyone developing extraordinary abilities without intense, extended practice.”

Consider Mozart, who was so accomplished at such a young age that there seems to be no way to explain it other than assuming he was born with a divine spark.

Upon closer inspection, however, Mozart’s spectacular abilities aren’t that inexplicable. For one thing, it’s not uncommon nowadays to have four-year-olds playing musical instruments with remarkable facility and better than most adults. Many of these “natural prodigies” start practice as early as age two. Mozart himself probably began his training before the age of four.

What about his compositions? Well, turns out his first serious compositions were written when he was fifteen or sixteen – after more than ten years of practice under his father. A father who was a famous music teacher at the time and pushed Wolfgang from a tender age.

So there goes Mozart’s legend of being a natural. As Anders Ericsson concludes, “…while there is no doubt that Mozart would become an extraordinary musician and composer, there is no evidence for – and plenty of evidence against – the claim that he was a prodigy whose accomplishments cannot be understood as the result of practice and must therefore be attributed to innate talent.”

The same can be said for other “prodigies.” While normal kids play in the sandbox, they are practicing. They tend to start incredibly early and have parents who push them into inhumane practice schedules. It’s not a story of talent, but of hard work.

The Myth of Savants

Another often-mentioned display of natural talent are so-called savants. These individuals tend to struggle to function in the world – some of them are autistic, most score low on IQ tests, and some can barely interact with other people.

Yet, almost as if to compensate, they were born with exceptional talents – or so goes the narrative.

Consider a child who has the ability to solve any jigsaw puzzle placed in front of him picture side down. Just by looking at the shapes of the pieces, he can put the puzzle together, and fast. Or take another savant, blind from birth, who supposedly played Tchaikovsky’s Piano Concerto #1 flawlessly from beginning to end, having heard it just once. Or the infamous Donny, an autistic savant who can provide the day of the week for any particular date within a second of hearing the date.

According to Anders Ericsson, none of this is magical or needs innate talent to be explained. Rather, he says, these are highly developed skills that are the result of thousands of hours of practice. (Sound familiar?)

In Peak, he concludes, “…studies of savants’ abilities indicate that these are primarily acquired skills, which in turn implies that the savants develop those abilities in ways that are very similar to how other experts do it. That is, they practice in a way that engages their brain’s adaptability, which in turn changes their brains in ways that lead to their extraordinary abilities.”

No magic. No miraculous, God-given talent. Savants have to work for their remarkable abilities, just like everyone else.

The Myth of the Talentless

What about the flip side of prodigies? People who seem to display zero talent in certain endeavors? People who whole-heartedly claim they can’t sing, can’t do math, or can’t dance?

In those cases, the reason these people can’t sing, do math, or dance isn’t due to a lack of talent, but rather due to a lack of proper practice, resulting from the very belief in their talentlessness.

Take singing, for example. According to Ericsson there is “no evidence that large numbers of people are born without the innate ability to sing. Indeed, there are some cultures, such as the Anang Ibibio of Nigeria, where everyone is expected to sing, everyone is taught to sing, and everyone can sing. In our culture, the reason that most nonsingers cannot sing is simply that they never practiced in a way that led them to develop the ability to sing.”

The same goes for math, Ericsson argues: “…a number of successful efforts have shown that pretty much any child can learn math if it is taught in the right way.”

If you’re bad at math, singing, dancing, reading, gymnastics, or sports in general, it’s because you were never taught to do it properly. Perhaps you gave up too quickly. Perhaps you were afraid of embarrassment and withheld effort. Whatever the reason, the seeming talentlessness of people comes down to a lack of practice. No magic involved.

The Real Role of Innate Characteristics

(That is not to say we are at the mercy of our genetic blueprint, either. Just because someone has a predisposition to alcoholism, doesn’t mean they’ll necessarily become an alcoholic. Our environment rules just as much influence on the shaping of our lives as our genes. In fact, probably much more.)

The truth is, the role of innate characteristics in shaping extraordinary performance is misunderstood by most of us. Contrary to popular belief, there’s no such thing as a “music gene” or “sports gene” or “math gene.” There’s no such thing as being naturally talented at music, sports, or math. Rather, the role of innate characteristics comes down to two things:

Innate Characteristics and their Role in Early Skill Development

Consider research exploring the role of IQ in chess ability, which found that children with higher IQs find it easier to learn the rules of the game and to develop strategies, giving them an early advantage in winning at chess. But this is just in the beginning. Over the long run, the most significant predictor of chess skill isn’t IQ, it’s how much children practice.

IQ, which is in large part hereditary, plays a role in how fast we pick up new skills. It helps us learn and remember the rules and come up with initial strategies. It may give us confidence. And so IQ makes a difference in the first hours of skill development. However, once you get into the realm of expert performance, into hundreds and thousands of hours of practice, the role of IQ becomes nearly inexistent. After a certain point, the only real difference in performance is practice.

Think back to the violin study we discussed in this article. The difference in skill corresponded perfectly with the amount of accumulated practice. The best violinists accumulated 7,410 hours of practice till age 18, the second group 5,301 hours, and the lowest skilled group 3,420 hours.

The point is: people with certain innate characteristics – IQ, in the case of the chess study – seem to have an advantage when first learning a skill. An advantage, however, that gets smaller over time, and eventually becomes negligible as the amount and quality of practice is increased.

Innate Characteristics and How They Shape Practice Behavior

There is another mechanism innate characteristics may play in the development of expert performance. Certain genetic differences may manifest themselves in an indirect way by influencing how much and how well someone practices.

Some children, for example, may be born with genetic predispositions that cause them to get more pleasure from playing sports or making music. They are then more likely to spend more time playing sports or making music. Their parents may put them in tennis or music classes, where they’ll practice more than other kids because they get more enjoyment from it. In this way, it would be easier for these children to engage in the thousands of hours of practice necessary to become an elite performer.

Natural, innate talent is highly overrated – that’s the truth. Greatness is the story of practice, not hard work. As Anders Ericsson says, “The journey to truly superior performance is neither for the faint of heart nor for the impatient. The development of genuine expertise requires struggle, sacrifice, and honest, often painful self-assessment.”

On the other hand, you’re equipped with a powerful piece of information now. You know that skill is a matter of effort. You can get better at anything you want. You can master anything you previously thought impossible. If you want to improve your social skills, your golf game, your writing, your public speaking – you can.

Do with this information as you please, but keep in mind what Shakespeare said, “There is nothing either good or bad, but thinking makes it so.”

This was the third article in a series on expert performance and deliberate practice. Here’s a full overview of all articles in the series.