What Are The Negative Consequences and Effects of Procrastination? 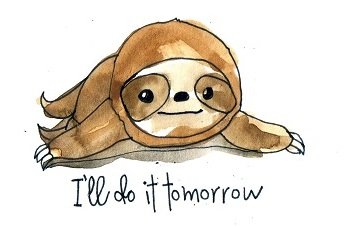 What Are The Negative Consequences and Effects of Procrastination?

I’ve always acted as if procrastination wasn’t a big deal.

Sometimes I even bragged about it to my friends, saying something along the lines of: “I’m so lazy. You guys couldn’t even imagine. Seriously, I’m the worst, haha!”

In reality, I always knew what a terrible habit it was. I knew the costs I was paying. And I knew I had to get a handle on it sooner or later.

Maybe you’re feeling the same way. Maybe not. In any case, it’s my hope that examining the costs of procrastination will strengthen your commitment to overcoming this dreadful habit.

So why is procrastination a problem? Let’s look at its effect on the big three: health, overall achievement in life, and happiness.

The reasons are multitude. For starters, putting off treatments, colonoscopies, regular check-ups, and other visits to the doctor, means we might run into the risks of being too late to prevent a serious disease – maybe the cancer is already too advanced.

I once almost lost part of my eyesight because I waited far too long to go to the doctor with a serious eye infection. But hey, at least the delay resulted in serious pain, the worst night of my life (a great story for another time!), and days of lost productivity. I also had to visit the doctor an additional five or six times… and it’s not like I’ve got nothing else to do.

Procrastination also puts an unnecessary burden on our bodies and immune system by causing as boatloads of stress and other negative emotions. Stress, guilt, anxiety, shame, and self-criticism aren’t exactly good for us.

Another issue is that chronic procrastinators needlessly delay health behaviors such as eating healthy, exercising, and getting enough sleep. Pulling all-nighters and putting crappy food in our bodies may not be a big deal in the short-term, but over the long haul it results in serious health conditions such as diabetes or heart disease. Not to mention the loss in energy, productivity, vitality, longevity, and so on!

Last but not least, the lack of self-control that causes procrastination in the first place also means that procrastinators are more likely to engage in activities that are well-known to cause physical harm – smoking, drug abuse, overeating, risky driving, excessive alcohol use, unprotected sex, and so on.

Without a doubt, procrastination is bad for our health.

Next up, overall success in life.

Once again, it’s not surprising at all that procrastinators tend to do worse than their more disciplined peers.

If you’re a procrastinator, you know well enough that you’re operating below your potential.

While high achievers are working hard, hustling, learning, and getting things done, procrastinators are wasting hours and hours of their days watching TV, playing video games, goofing off on social media, or otherwise distracting themselves.

What About Life Satisfaction?

Surprise: It turns out procrastinators are happier than other people because they spend so much time in front of the TV and playing video games.

Again, there are multiple reasons. For one, procrastinators are less successful in most areas of life (health, wealth, career, relationships, etc.), so, no wonder they’re less happy than more accomplished people.

In addition to that, procrastinators tend to be highly self-critical. They can’t get themselves to do what they would like to do and then beat themselves up over it.

In constant fear of those mental beatings, they self-sabotage themselves, resulting in even less productivity and more dillydallying. It’s hard to be happy when you’re living in constant fear of disappointment and self-criticism.

And then there’s the constant guilt. We already tend to feel guilty no matter what we do, but add some needless delay into the mix and the guilt quickly becomes unbearable.

I remember that during my worst times I couldn’t properly enjoy anything. It seemed like I was always just running away from the guilt, numbing myself with endless hours of online gaming or watching TV series.

When I went out to meet friends or engage in some other leisure activities, there was always a cloud of guilt looming over me. I couldn’t enjoy myself at all. Because I was never really productive, it felt like I never deserved any time off.

I was always either “working” or feeling guilty for not working.

And there’s one last piece to the misery puzzle I want to address. How could procrastinators ever be truly happy when they know damn well that they’re wasting their potential?

Every procrastinator (I suppose!) knows that they’re capable of so much more. They know what they’ve got inside them. They know they could achieve great things in life and make big things happen. The fact that they can’t get over themselves keeps nagging at their self-esteem and happiness.

The procrastinator’s life is one of missed opportunities, wasted potential, fear, shame, guilt, and disappointment.

And if you think that things are bad right now, wait till the future comes and hits you right in the face with a big, fat portion of regret. Not having cared for your health, not having done enough, not having tried, not having lived up to your greatest potential. Those things will create massive pain if you’re not able to get a handle on this problem sooner rather than later.

Maybe I’m exaggerating a bit, but deep down you know what I’m saying is true. You know you’ve got more to offer, you know you want to do more, you know you can do great things… if you can just get over this damned procrastination problem.

The good news is, you’re in the right place. I’ve personally gone through a remarkable transformation myself and you can learn the exact tools and tactics I’ve used to make that happen.

Start by downloading my brand new and completely free 17-page anti-procrastination guide, 33 Proven Tactics to Procrastinate Less and Get More Done. You can download it for free by clicking the link below:

33 Proven Tactics to Procrastinate Less and Get More Done »