6 Little-Known Facts about Procrastination Nobody Tells You About 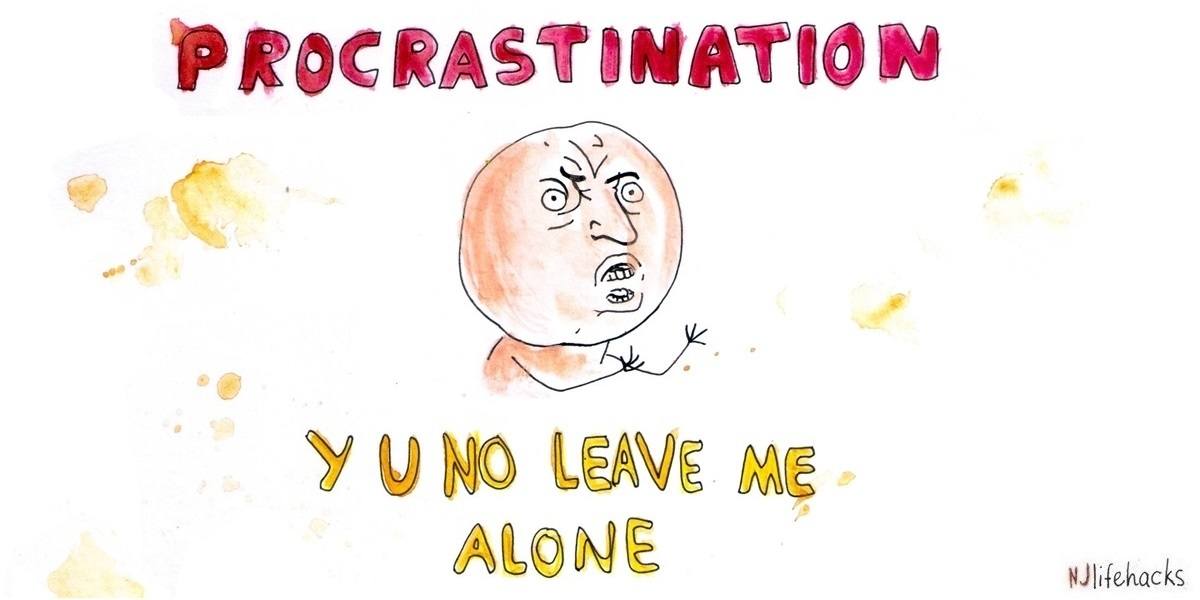 I firmly believe in that statement: Having knowledge is powerful in many ways, especially in helping us facilitate positive change.

“But,” you may interject, “knowledge is only powerful when it’s implemented, otherwise it’s useless!”

Oftentimes, merely knowing something is enough to cause change. Once you know your food is poisoned, you stop eating it immediately. Once you know caffeine is wrecking your sleep, you stop drinking coffee at night.

Sometimes, the step between knowing and applying is so tiny that the implementation part happens automatically. Merely knowing something is often enough to cause positive change. That’s why I’m going to equip you with some little-known knowledge on the topic of procrastination today.

(Shameless plug: It’s also why I highly suggest checking out my book on procrastination.)

For now, enjoy these 6 little-known facts about procrastination.

Did you know that procrastinators feel actual physical pain when contemplating dreaded tasks?

It’s true. I learned about it in Barbara Oakley’s book A Mind For Numbers:

“We procrastinate about things that make us feel uncomfortable. Medical imaging studies have shown that mathphobes, for example, appear to avoid math because even just thinking about it seems to hurt. The pain centers of their brains light up when they contemplate working on math.”

What’s our natural reaction when we’re confronted with pain? Avoidance.

That’s why we procrastinate: Certain tasks make us feel bad and in order to mitigate these uncomfortable and painful feelings, we simply avoid the task. Problem solved. At least for now.

In real life, a lot of this is happening unconsciously, well below our everyday awareness. You sit down at your computer, and you swear you’ll work on your important school project. Next thing you know, it’s ten hours later. You’ve checked your email a gazillion times, uploaded a new Facebook Profile picture, went through 100s of pages on Reddit, read multiple articles in your Twitter feed, cyber-stalked your ex, looked up some weird shit on Wikipedia, and browsed through all your friends’ Instagram feeds.

The only thing you haven’t done is work on that important project.

What happened? The primal part of your brain, looking to avoid what feels bad and approach what feels good, steered you away from the dreaded work project. Sneaky, huh?

The good news is, there are many strategies to circumvent this problem, and I talk about many of them in my Kindle book Stop Procrastinating: A Simple Guide to Hacking Laziness, Building Self Discipline, and Overcoming Procrastination.

For now, know that the key to getting rid of the task-associated pain is to simply get started on the dreaded task.

You see, the pain is in the anticipation, not in the actual doing of the task. Once you’re engaging with a task, the pain almost immediately disappears. I talk more about this and about strategies for getting started on hard tasks in this article.

2. Procrastination Is NOT About Time Management

Procrastination is not a time management issue. Most procrastinators I know are just as good as managing their time as others. They may be a bit more optimistic with their time allocations, but that’s not why they procrastinate.

Consider me as an example. There were countless times in my past when I had my days perfectly planned: Wake up early, meditate, exercise, take a shower, eat the frog of the day, and so on. Any time management guru would have been proud of me.

But guess what happened? I hit the snooze button, slept until 10 am, and ended up feeling so guilty and ashamed that I’d distract myself with Facebook, watching TV, and online gaming for the rest of the day.

Even if I managed to wake up early, I just couldn’t get myself to follow through with my beautiful time management plans. I sincerely wanted to, but the resistance – the negative emotions associated with certain tasks – was just overwhelming and I procrastinated.

Procrastination is about managing the self (our thoughts, feelings, and actions), not managing time.

3. Procrastinators Care too Much, not too Little

Do you ever find yourself bragging about procrastination?

I did it all the time in high school and at University. I was the cool kid who couldn’t bother doing homework or studying for exams. Who gives a shit, right?

The reality was, there were times when I sincerely wanted to study or do homework on time. I just couldn’t get myself to do it. Rather than admitting this, I found it easier to portray myself as a rebel who just didn’t care.

It’s this type of behavior that lets people believe procrastinators are just careless and lazy, when in fact, the opposite is true.

Far from being carefree, procrastinators tend to worry just as much, if not more than other people. The typical procrastinator worries that what she does is not good enough, people will judge her, she will get disapproved of or even ridiculed.

Whatever the exact patterns are, procrastinators tend to worry a lot. Then, in order to mitigate the negative feelings generated by all the worrying, they put off the task.

4. The Number One Reason People Give for Procrastinating Is…

“Whether tiredness is drug-induced or not, being too tired is the number-one reason given for procrastinating; 28 percent of people claim, ‘Didn’t have enough energy to begin the task’ as the cause… Fatigue increases task-aversion, saps interest, and makes the difficult excruciating.”

This makes a lot of sense. When we’re tired, we are low on energy. And since overcoming our tendencies to procrastinate takes energy, we are doomed to fail once we’re out of that precious resource.

While I can’t go into any details here, the implications are rather obvious.

Ever told yourself that crap? I did many times. In truth, we won’t feel more like doing it tomorrow. Why would we? It’s just a trick our mind is playing on us. Allow me to explain…

What happens here is called affective forecasting – we predict our future mood.

Unfortunately, as the “I’ll feel more like it tomorrow” trap illustrates, we’re not very good at it. We think that winning the lottery will make us happy beyond belief, or suffering a debilitating accident will make us miserable till the rest of our life. According to the science, both of these predictions are wrong.

Why do we feel good when intending a future action? First, because putting off a dreaded action feels good. “Ah, I don’t have to exercise now. What a relief.”

Second, imagining yourself engaged in a productive future action makes you feel good in and of itself. If you imagine yourself exercising tomorrow, you feel pretty good about yourself for making such a proactive and healthy decision. Good for you! You may even feel a bit of pride.

On the next day, however, you’re yet again faced with the dreaded task. You feel just as anxious, bored, frustrated, or overwhelmed again. And you’re again faced with the all-important decision: Should I give in to immediate gratification and procrastinate? Or should I just do the thing and get it over with?

Next time you catch yourself saying and maybe even believing, “I’ll feel more like it tomorrow,” remind yourself that it’s just a trick of the mind. Realize that you won’t feel like it tomorrow either. Better to just get it over with today.

Procrastination is a battle between what you should be doing and what you want to be doing.

Technology makes procrastination worse because it creates a massive pleasure gap between what you should be doing and what you want to be doing. What you should be doing – studying, cleaning, exercising, etc. – is still about as pleasurable as it was 100s of years ago. What you want to be doing – playing video games, going through your Facebook feed, or watching Netflix – is a lot more pleasurable today than a hundred years ago.

The statistics show that procrastination has seen at least a 5-fold increase over the last couple of decades. In the 1970s, only about 4-5 percent of people indicated that they considered themselves as procrastinators. Today, that number is at a staggering 20-30 percent.

If you consider the pleasure gap, it’s not surprising that people in the 1970s didn’t struggle nearly as much with procrastination as we do. What were they going to do with their time anyway? Play with a stick of wood?

Seriously, think about it. In the 1970s, there was no internet, no video games, no Xbox, no PlayStation, no smartphones, no iPad, no Facebook, no Snapchat, no Instagram. If you were lucky, you had a TV with five or ten channels – certainly no high-definition, no recording capabilities, no playback or skipping functions, and no one-click movie purchases.

“…proximity to temptation is one of the deadliest determinants of procrastination. [And] the more enticing the distraction, the less work we do.”

Whether we like it or not, technology is a key driver of procrastination. If we want any chances of overcoming this dreadful habit, we need to learn how to interact with technology in healthy ways. Interested in learning exactly how to do that? Check out this article.

So there you have it. Six little-known facts about procrastination. Since you know about these now, you’ll probably find yourself procrastinating a little bit less in the future. After all, knowledge is power and merely knowing something can be enough to facilitate positive change (whether it happens consciously or unconsciously).

Now, I’d love to hear from you. What are your favorite facts about procrastination? Leave them in the comments below, and thanks for reading!

Facts are cool and knowledge is power. But you may still want some actual strategies for overcoming procrastination.

Well, I’ve got you covered. In my free guide, you’ll find over 30 proven strategies for curbing your procrastination habit. You can download the 17-page PDF for free by clicking the link below:

==> 33 Proven Tactics to Procrastinate Less and Get More Done