The Psychology of Email: Why You Can’t Stop Checking Your Inbox and How it Stresses You Out - NJlifehacks 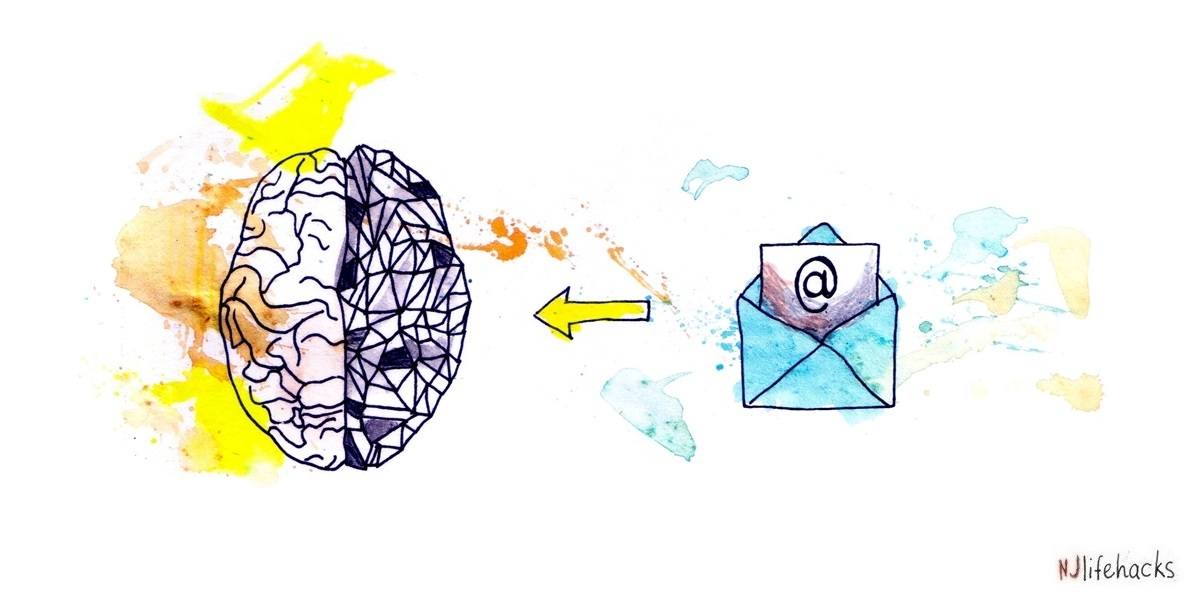 The Psychology of Email: Why You Can’t Stop Checking Your Inbox and How it Stresses You Out

Our relationship with email is broken.

According to a 2012 study, workers spend 28% of their work day reading and responding to email, and they check their inboxes a whopping 74 times a day. Another study found that office workers switched windows an average of 18 times each hour when they didn’t have access to email – but 36 times per hour when they did.

A study in the U.K. found that after dealing with an email, which took an average of just under two minutes, office workers needed an average of 68 additional seconds to return to their work and remember what they were doing. The same study also found that people wait only an average of one minute and forty-four seconds to open a new message. In fact, 70% of email alerts were attended to within a mere six seconds.

When people in another study were asked how often they checked email, they claimed doing so every fifteen minutes when, in fact, it was about every five minutes. What’s more, researchers have found a clear link between spending time on email and stress. One study found that the more frequently we check our email, the more stressed we are.

Clearly, email is an issue. But why is it so pervasive? What is it about email that makes it so addictive and stressful? Here are six reasons that make the psychology of email so problematic.

1. The Allure of Random Rewards

In the 1930s, Harvard psychologist B.F. Skinner started his infamous experiments with rats, bringing us the ideas of operant conditioning, positive and negative reinforcement, radical behaviorism, and more.

Perhaps his most important finding revolved around the following idea: What gets rewarded, gets repeated. Skinner found that when rats got rewarded for pressing a lever, they’d press it over and over again in the hope of more rewards. As Skinner put it, the reward reinforced the behavior. Most importantly, though, Skinner found that not all rewards worked equally well. The type that influenced rats’ behavior by far the most were variable rewards – sometimes you get a little, sometimes nothing, sometimes a lot.

When Skinner put his rats on this type of random reward schedule, they’d go crazy pulling the lever more compulsively than ever before. They even kept pulling it long after Skinner had stopped the rewards completely. Variable rewards came to be known as the secret sauce of addictive behavior.

Fast forward to today and we’re all acting much like Skinner’s rats – unable to stop ourselves from pulling the lever of email. Why? Because email is an almost perfect random reward system. Most of the time, the emails are nothing special. But every once in a while, when you pull the lever to refresh your inbox, you find a gem. An email from your boss complimenting your work, an email saying you won something, an email from an old friend, or an insanely funny cat video.

These variable rewards make us want to check our inboxes over and over again, pressing the refresh button like little addicted rats in the hope of a quick dopamine hit.

There is one element that, if you combine it with random rewards, can result in an extraordinary level of addictedness to a behavior. That element is what I call ease of accessibility.

Think of it this way: If you had to walk up to your roof every time you wanted to check email, you wouldn’t be nearly as addicted. The problem with a lot of today’s technology is that it’s instantly available to us 24/7. It takes me less than a second to type in “m” into my browser and voila: Chrome auto-completes it to “mail.google.com” and I’m in. “Why not invest a second in the hope of a potentially life-saving reward?” argues our brain.

Human beings are wired to seek completion, a tendency known as the completion bias. Cliffhangers make us feel uneasy while ticking off items on to-do lists makes us feel good. Research literally shows that checking off items is psychologically rewarding and releases dopamine in the brain.

This bias plays out in two ways that are relevant for email. First, every time you “complete” an email, even if you just archive it, you receive a small reward. Second, when you’re staring at an email inbox with 50 messages, you will naturally want to get them out of the way to arrive at a rewarding place known as Inbox Zero – ah, finally, completion! (But for how long?!)

Ever wonder why we spend too much time on email and not enough time on high value activities? While it’s easy to achieve completion – big or small – with email, it’s much more arduous to achieve with bigger projects.

Nothing is quite as motivating as making some good ol’ progress. Harvard professor Teresa Amabile calls this the the progress principle: “Through exhaustive analysis of diaries kept by knowledge workers, we discovered the progress principle: Of all the things that can boost emotions, motivation, and perceptions during a workday, the single most important is making progress in meaningful work.”

Email allows a quick and easy gateway to experiencing the feel-good nature of progress. You started off with 176 messages and now you’re down to 78 – progress, baby!

This is another reason why we overspend time on email. While it’s easy to see the progress we’re making in our inbox, it’s much harder to see it on big projects. Worse yet, many applications hide or delete the progress we’ve made thus far.

Jocelyn Glei explains this paradox in her book Unsubscribe: “When we write a shitty first draft in Word or Google Docs, we highlight it, erase it, and begin again in the same file until we get it right. By the time you get to the finished product, it’s as if the first, second, third, and fourth efforts never happened. Those version have simply vanished. Similarly, we cut and paste away our progress in numerous other apps, from Photoshop to PowerPoint, on an hourly basis. And even if you are meticulous enough to maintain separate versions of your files, they’re usually tucked away in a digital folder that’s out of sight, out of mind.”

As human beings we are subject to a wide range of negativity biases. Our thoughts tend to be more negative than positive. Our attention naturally wanders to negative stimuli of the environment. Negative experiences are more likely to get encoded in implicit memory. And so on.

When it comes to email, the following negativity bias applies, according to brain expert Dan Goleman: A positively intended email is interpreted by the receiver as neutral; a neutrally intended email as negative.

This is a big source of email-related stress. When you receive a neutrally intended email, you might interpret it as negative and wonder, “Why is she so angry about this? What’s her problem? What did I do wrong? What should I do now?” Similarly, when you send out a neutrally intended email, you might receive a response with a level of outrage that seems completely out of proportion.

In addition, the lack of social cues in emails means you need to spend more time interpreting a sender’s message. Are they angry with you? Are they upset? Should you apologize?

The rule of reciprocity states that if someone does something for you, you then feel obligated to return the favor. As far as email is concerned, we tend to feel obligated to respond – and to do it quickly. How often have you started an email with, Sorry for my late response but…?

This is another source of constant stress. While I personally don’t feel obligated to respond to all emails, I do feel obligated to emails from clients, customers, friends, and acquaintances. The more of these emails pile up in my inbox, the more guilty and stressed out I’m going to feel.

What Can You Do About it?

What can you do to better handle email, so you can save time and feel less stressed? Here are a few tips.

Disable notifications (duh!). We self-interrupt often enough – no need to have external notifications derail our productivity even more. If you’re anxious of missing something important, set up notifications for your VIPs, such as your boss, spouse, or kids.

Set expectations. If you’re worried people will complain when you don’t respond immediately, let them know in advance. Tell your VIPs about your new email habits or set up an automated response, saying something like this: “Thanks for your email. In an effort to be more productive, I only check email twice a day – at 11am and 4pm. Thanks for your understanding.”

Send short expectation-setting emails. When you don’t have time to respond to an urgent email immediately, reduce stress and put the other person at ease by letting them know what’s going on: “Hey Matt – thanks for getting in touch. I’m busy with important work all week and won’t have the time to give your proposal the attention it deserves. I’ll get to it next Monday and will contact you Monday afternoon. Thanks for your patience.”

Reduce ease of accessibility. Making it harder to access your inbox will automatically reduce the amount of compulsive email checking you do. Here are some tips: