Research Says You Should STOP Consuming the News – If You Want Greater Health, Happiness, and Productivity - NJlifehacks 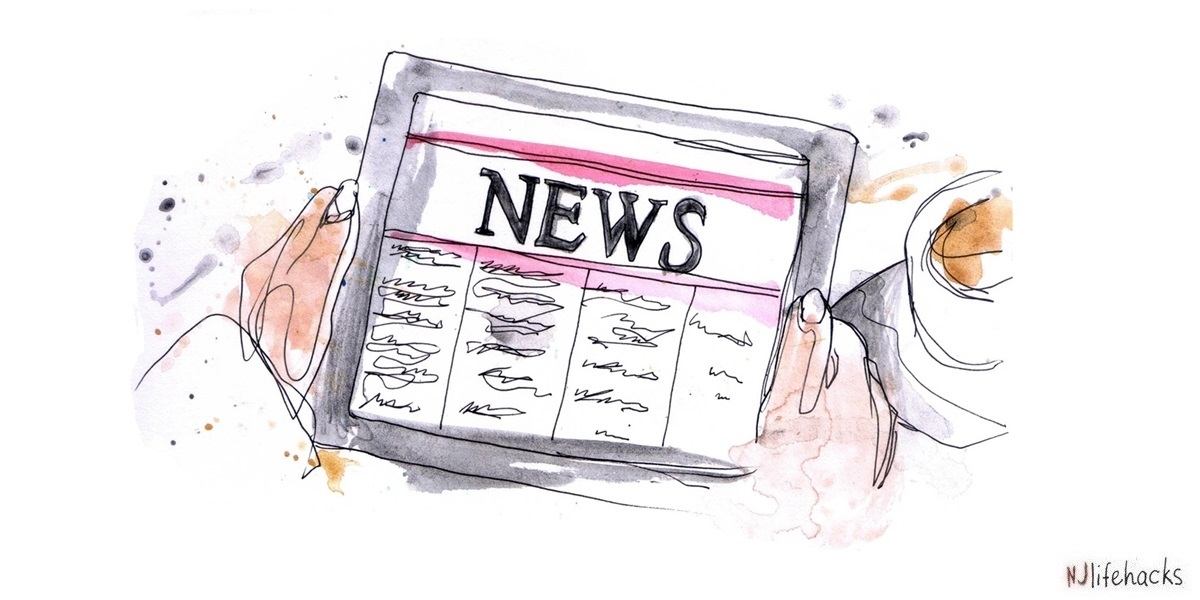 Research Says You Should STOP Consuming the News – If You Want Greater Health, Happiness, and Productivity

“If you wish to improve,” Stoic philosopher Epictetus said, “be content to appear clueless or stupid in extraneous matters.”

We sometimes play general knowledge games, such as Trivial Pursuit, at our family get-togethers. Questions include such classics as…

My most common answer: I don’t know, and I’m glad I don’t. In the past, I followed up, “I don’t need to know that BS, how exactly is that going to help me live a better life?” Nowadays, I just let them make fun of me before I beat them in a game that truly matters, such as Settlers of Catan or Risiko.

The truth is, I’m happy to appear clueless in extraneous matters. I have made the deliberate choice to reduce my intake of negative news, gossip, and other banalities to a minimum. And I think you should do so, too.

What Makes News So Appealing?

According to a Pew survey, Americans in 2010 spent an average of 57 minutes a day getting news from radio, television, and print newspapers, and an additional 13 minutes getting news online. That’s a total of 70 minutes of news consumption every single day. And let’s face it: Today, that number is likely higher due to the amount of time we spend on social media and on our phones.

Calling it News, by the way, is misleading. What we call “News” consists almost exclusively of four categories: negative events, gossip, sports, and politics. Why? Because these topics have been shown to capture the most attention. Negative stories hook us because of our built-in negativity bias, gossip plays on our drama-and-entertainment seeking, sports let us experience vicarious success or schadenfreude, and politics triggers, among other things, our tribalism and sense of belonging.

Let us discuss some especially appealing aspects of the News in more detail.

Negativity bias. “If it bleeds, it leads,” has long been the main motto of journalists, and for good reason. Nothing catches human attention quite like stories about war, crime, terrorism, inequality, drug abuse, pollution, or oppression. Why? Because, for survival reasons, are brain pays more attention to the negative than the positive. If you don’t find a carrot today, you can look again tomorrow. If you get eaten by a tiger, there’s no tomorrow. Hence, throughout our evolutionary history, we had to pay more attention to the negative. Today, when you see a negative headline, some unconscious part in you urges you to pay attention to it – hey, you might die if you don’t!

Novelty bias. It’s not just negativity that captures our attention. We possess a built-in novelty bias as well, meaning anything new or shiny captures our attention. News are compelling because they promise new information, and new information gave our ancestors a survival advantage. Since we still possess the same brain as said ancestors, we feel compelled to gather as much information as possible. If the information is labeled “new,” our brains automatically assign more importance and thus more attention to it.

Entertainment-and-drama bias. This isn’t an official bias, but it could easily be one. Let’s face it, human beings crave to be entertained and we love ourselves some drama. When the next Kardashian scandal, Trump blunder, or some random clickbait headline rolls around, we don’t stand a chance.

Sports identification and vicarious success experiences. Watching sports provides a sense of belonging, known as sports identification. It also bolsters self-esteem and creates a sense of pride and accomplishment through the process of vicarious victory. As psychology professor Ronald F. Levant explains, "Identifying with your sports teams is one of the ways you can vicariously experience success, and in real life, success is hard.”

These elements, by playing on our unconscious buttons, demand our attention and pull us into greater and greater News consumption. And this will only get worse. By learning more about the human psyche and by fine-tuning their sophisticated algorithms, the media will get better and better at seizing our attention.

So, we find News appealing and we spend a lot of time consuming it. What’s the big deal? Well, I’m here to tell you. Below are four reasons why News consumption is harming you, and why you should reduce it to a minimum.

1. It Kills Your Mood

In another study, 110 participants were blindly placed into one of two groups. The first group watched three minutes of negative news stories before 10 a.m.; the second group three minutes of solutions-focused news. Then, all participants were emailed six hours later and told to fill out a survey about their mood and stress levels within the next two hours. The results showed that individuals who watched a mere three minutes of negative news in the morning had a stunning 27% greater likelihood of reporting their day as unhappy six to eight hours later compared to the other group.

Consuming negative news immediately puts you in a worse mood, and this effect can last for eight hours, and perhaps far longer.

Now, unless you’re into positive psychology or into the science of emotion regulation, you may think this is not a big deal. But you’d be wrong. You see, your mood has a gigantic effect on your health, relationships, and productivity. We know that positive emotions improve almost every aspect of your life, while negative emotions impair almost every aspect of your life.

One study concluded that negative affect (negative emotional states) is the most potent threat to self-regulation: “Contemporary investigations into the causes of self-regulation failure have demonstrated that the ability to self-regulate can be undermined by a variety of threats that act by impairing awareness, exhausting limited resources, or increasing the salience of temptations. Perhaps the most potent of these threats is negative affect. When people experience emotional distress, be it in the form of a bad mood, disappointment, or social rejection, they often find it more difficult to resist temptations or to suppress unwanted impulses and may engage in various forms of self-defeating behaviors.”

When you’re in a bad mood – when you’re under the influence of negative emotions – your self-control is inhibited, you’re more aggressive, less willing to help others, don’t persist as long on difficult tasks, experience stronger substance cravings, and so on. You’re basically a sucky version of yourself.

Compare that to being in a good mood, to experiencing positive emotions. You have more self-control, your problem solving is enhanced, your stress levels go down, and you’re more creative and empathetic. In a study with kids, for example, the ones who felt more positive emotions outperformed the others, completing tasks faster and with fewer errors.

If you want to perform at your best, ditch the negative news and opt for mood-boosting activities instead. Go for a walk, chat with co-workers, call your mom, play some ping-pong, or perform a random act of kindness.

2. It Stresses You Out

A major US survey showed that exposure to the News is one of the most commonly reported sources of daily stress. Of people who reported high levels of stress, 40% listed consuming the News as a major contributor to the stress in their lives.

Particularly detrimental news events are those of natural disasters or terrorist attacks as they have consistently been shown to increase the risk of developing depression or even post-traumatic stress disorder (PTSD). One study found that people who watched six or more hours of News about the Boston Marathon bombing in 2013 were more likely to develop PTSD than people who were actually at the bombing.

Now, stress isn’t necessarily a bad thing. In certain situations, by making us faster, better, and stronger, stress is a marvelous and incredibly helpful mechanism. However, when you’re reading, listening, or reading about a negative news event, that stress isn’t needed and simply adds to your chronic stress load. And the higher this chronic stress load rises, the more your well-being suffers, as beautifully explained in Robert Sapolsky’s Why Zebras Don’t Get Ulcers.

Chronic stress impairs willpower and other executive functions in the brain, and contributes to everything from clinical depression and anxiety, to diabetes, chronic fatigue syndrome, cardiovascular disease, atherosclerosis, heart attacks, and much more.

3. It Exacerbates Your Worries and Anxieties

Recall the study with negative, positive, and neutral news bulletins. After watching the respective bulletin, participants were asked about their main worry at the time. The researchers then asked them to think about this worry during a structured interview. The results showed that those who had watched the negative news bulletin spent more time thinking and talking about their worry than people in the other two groups. They were also more likely to catastrophize their worry – make it seem much worse than it was at the outset and much worse than it is in reality. In other words, they were making mountains out of molehills.

Not only will negative News make you more anxious, stressed, and sadder, it will also exacerbate your personal worries and anxieties. You might start catastrophizing personal concerns that are in no way related to the content of the information you’ve consumed.

In this way, negative News can result in so-called negative spirals. You read about a school shooting, your mood plummets, your stress levels rise, your worldview turns more pessimistic, you start worrying about your job, you feel even worse, you’re even more stressed, and so on. Granted, I’m exaggerating a bit – but why take the risk?

4. It Wastes Your Time

“I wish I’d spent more time consuming the News,” said nobody in the history of humankind ever. At 70 minutes per day, we are spending almost ten hours a week reading, listening to, or watching the News. Imagine what you could do with that time: learn a new language, join a cooking, yoga, dance, or meditation class, meet new people, have sex, read a book, go on trips, travel the world, live an adventurous life.

But no, you have to get informed about the latest Trump scandal. It’s time to take a close, hard look at what you’re doing here. 99% of News is irrelevant, merely a form of bad entertainment. Ask yourself if the time investment is really in good proportion to the value you’re getting.

So, What Should You Do?

The most important thing is to become more mindful and deliberate about your media consumption in general. If you really want to read an article about the latest school shooting, that’s fine. But it should be a conscious choice, not a compulsive habit.

Here are some more suggestions to break free from News consumption or at least make it healthier.

For more tips on how to handle addictive technology, check out this article.