Rethink Your Priorities: Get Better at What Matters - NJlifehacks 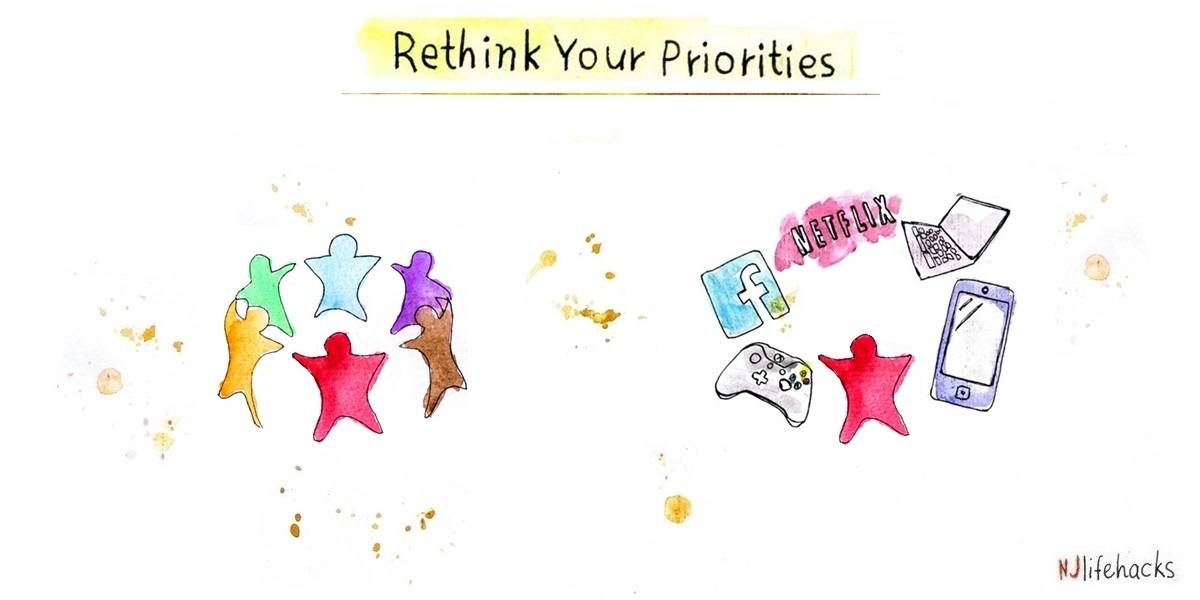 Rethink Your Priorities: Get Better at What Matters

Teacher: “How many Pokémon do you know?”

Teacher: “So you could learn some plant names, too.”

That’s a conversation I had with my teacher when I was eleven years old. I was annoyed that we had to learn all these plant names by heart.

My teacher was right, though, I could have learned these plants. I just thought it’s useless. And as a matter of fact, it would have been useless. As useless as knowing all the Pokémon (that was when there were only three Game Boy editions; blue (the one I played), red, and yellow.)

Why am I telling you this?

Because we spend too much time investing in things that don’t matter. Whether it’s Pokémon, celebrity gossip, or watching Trevor Noah’s The Daily Show.

None of these teach us how to live, how to listen to our kids, or how to be at peace with one’s own thoughts.

We spend our days getting better at stuff only to wake up someday not knowing who we are.

We climb the career ladder, get better at lifting weights or running miles, and improve our foreign language skills. But we neglect our family, lose our mind in traffic, and feel embarrassed for no reason in public.

Don’t get me wrong. These are all great things to improve, but we should not confuse getting better at stuff with being a better person.

What’s the point of winning at career and sports but losing in the effort to be a good mother, brother, or friend?

“You are winning affection in a job in which it is hard to avoid ill-will; but believe me it is better to understand the balance-sheet of one’s own life than of the corn trade.”
– Seneca

Seneca wrote this reminder to his father-in-law who lost his position as person in charge of Rome’s granary.

Who cares? Said Seneca, now he can spend time with what’s really important, “The love and practice of the virtues, forgetfulness of the passions, the knowledge of how to live and die, and a life of deep tranquility.”

It’s better to understand the balance-sheet of one’s own life than that of the corn market. This makes sense, right?

And yet we become experts at fantasy series and games, celebrity gossip, effortless jobs, and things that don’t make us any better at understanding our own balance-sheets.

I love how Ryan Holiday put it in his book The Daily Stoic: “At the end of your time on this planet, what expertise is going to be more valuable – your understanding of matters of living and dying, or your knowledge of the ’87 Bears? Which will help your children more – your insight into happiness and meaning, or that you followed breaking political news every day for thirty years?”

This is a no-brainer.

So let’s actually do this. Let’s rethink our priorities and get better at what matters.

And don’t envy the people who shine so bright in their careers, it comes at a cost as Seneca reminded his father-in-law:

“So, when you see a man repeatedly wearing the robe of office or one whose name is often spoken in the Forum, do not envy him: these things are won at the cost of life.”

Invest in Yourself & Become a Better Person – That’s What Matters

“But what does Socrates say? ‘Just as one person delights in improving his farm, and another his horse, so I delight in attending to my own improvement day by day.’”
– Epictetus

The choice is up to us.

Point is, we must take time for ourselves so that we can better understand ourselves and improve upon ourselves.

Invest in yourself and treat your life at least as seriously as your job and hobby. If you’re anything like me, you’re always trying to get better.

I remember my first long-distance flight from Zurich to Brisbane. It was only a few days after handing in my Bachelor thesis and one day after handing in the last term paper. (Yeah, I heavily procrastinated on those…)

I was looking forward to that little-planned trip. Finally, I was free from learning about stuff I didn’t care about. Finally, I could read and learn about things of great interest.

So I was listening to Dave Asprey’s amazing podcast about superlearning with Jim Kwik. I often paused and took notes. Suddenly, a young stewardess asked me if I was studying for some exam. I replied,

“No, I’m studying for myself.”

She looked puzzled. This was probably the first time she heard that sentence.

Point is, life is not about being good at school, acing tests, and impressing teachers, parents, and classmates. We should rather focus on how to live well. Something all philosophies have been concerned with: How to live a happy life?

I choose to read and study for life, to be a good human being. To become the best version of myself.

I believe it’s the right thing to invest in. And it doesn’t matter that I’ll never reach this goal.

Learning How to Live Takes a Whole Life

“Living is the least important activity of the preoccupied man; yet there is nothing which is harder to learn… Learning how to live takes a whole life, and, which may surprise you more, it takes a whole life to learn how to die.” – Seneca

I don’t know how long it takes to learn how to die. Maybe we don’t really need to learn it at all.

What I know, however, is that many people struggle with living well. We’ve got so many great things, yet we’re unhappy and depressed. If that’s not a sign that living well is hard, I don’t know what is.

Seneca said that even the people who invested their whole lives into learning how to live, ended up confessing that they didn’t know yet.

Living well is not some place we’ll end up once we’ve understood the matter of living and dying. It’s much more a process without a clear destination. It’s a direction of life that we can choose. Like Hercules did when he chose to take the difficult path.

Start carving out some time you can devote entirely to yourself. You will need it.

Choose Whose Child You Want to Be

“We are in the habit of saying that it was not in our power to choose the parents who were allotted to us, that they were given to us by chance. But we can choose whose children we would like to be.” – Seneca

Don’t try to learn everything by yourself.

Learn from the people who struggled the same struggles you’re struggling with right now. What helped them with their struggles might help you with your struggles.

(Sorry for all the struggles, I was struggling to find another word. *wink*)

You can choose whose child you want to be in the sense of who you want to learn from. Our parents might not always be the perfect role models. At least not for every chapter in our lives.

(I wrote in more detail about role models here.)

Point is, learn from other people. The difficulties you’re facing in your life are not unique, many people are struggling with the exact same issues.

Don’t Spend Your Time on Things that Don’t Matter

“It is essential for you to remember that the attentions you give to any action should be in due proportion to its worth, for then you won’t tire and give up, if you aren’t busying yourself with lesser things beyond what should be allowed.” – Marcus Aurelius

Don’t spend your time on things that don’t matter. Rethink your priorities.

To drive the point home, let’s look at a riddle, elephants, and degrees. Don’t spend your time on things that don’t matter.

In other words, spend most of your time on things that matter. Your family, your friends, your health, your commitments, and obviously, on yourself and your hobbies.

When a father spends one hour a day playing Zoo Tycoon and only half an hour with his four-year-old son, is then Zoo Tycoon more important to him than his son?

Point is, it might be worth to check once in a while what we spend our time with.

“By now the Romans too have been afflicted by the pointless enthusiasm for useless knowledge. Recently I heard somebody reporting which Roman general first did this or that: Duilius first won a naval battle; Curius Dentatus first included elephants in a triumph… such knowledge will not do us any good, but it interests us because of the appeal of these pointless facts.” – Seneca

I really wanted to include this and the next elephant story in this article.

I think it’s hilarious. (And also making a point.)

Almost two thousand years ago people learned useless facts. And already then some people thought it’s actually useless. Today in school, we still learn so many useless facts. Facts, that seem way less interesting than Seneca’s elephant stories. Here’s the next one:

“Does it serve any good purpose to know that Pompey first exhibited in the Circus a fight involving eighteen elephants, pitting innocent men against them in a staged battle? A leader of the state… thought it would be a memorable spectacle to kill human beings in a novel way. Are they to fight to the death? Not good enough. Are they to be torn to pieces? Not good enough. Let them be crushed by animals of enormous bulk.”

That’s entertaining, right? It might be crackbrained but it’s quite interesting.

Anyway, the point Seneca was trying to make is clear: Don’t waste your time engaging with useless knowledge. It won’t do you any good in the long-term. Rather spend your time learning how to become a better person. Spend your time on what’s actually important.

Get Better at What Matters. Period.

Jimmy is hailed as the best salesman of the month at the office. He’s celebrating wildly with his colleagues. Meanwhile… his son is standing in the rain next to the soccer pitch waiting for his Dad Jimmy to pick him up.

Successful is a broad term. And the two men in the clip are definitely bad examples...

So choose to become successful at what matters.

Rethink your priorities and invest in yourself.

"Be careful to leave your sons well instructed rather than rich, for the hopes of the instructed are better than the wealth of the ignorant." 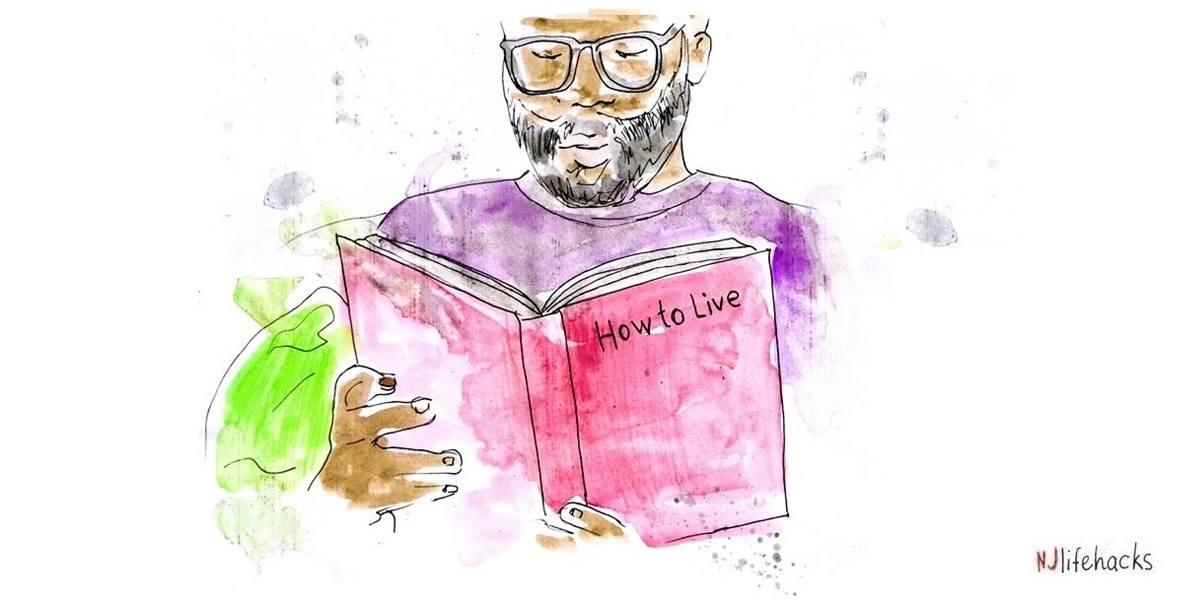 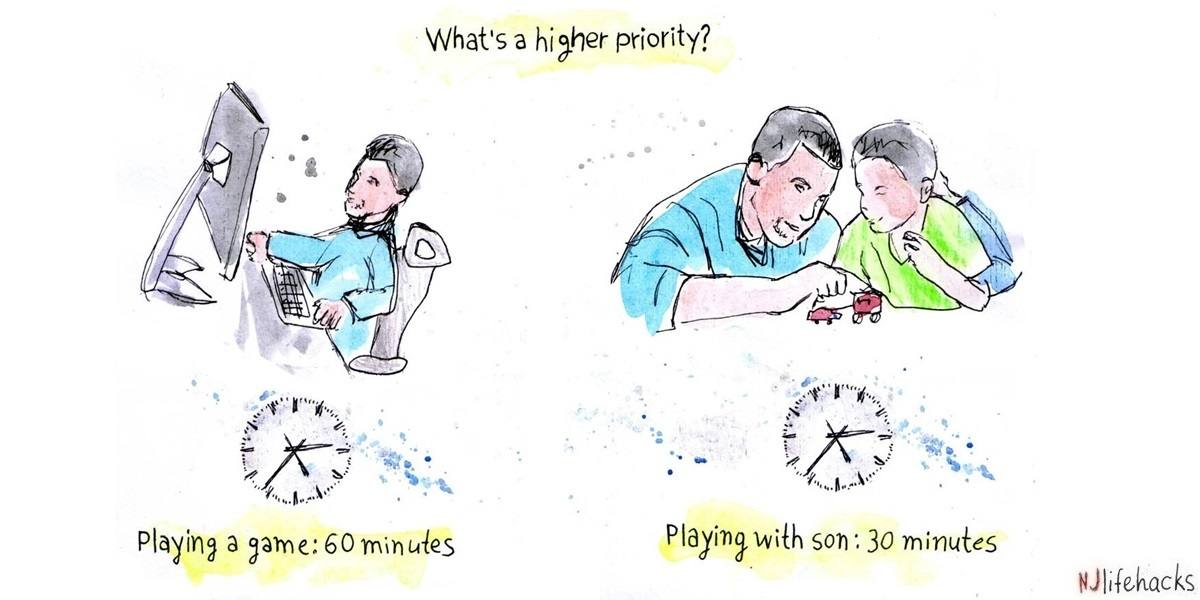