To Overcome Procrastination, Try Some Self-Compassion 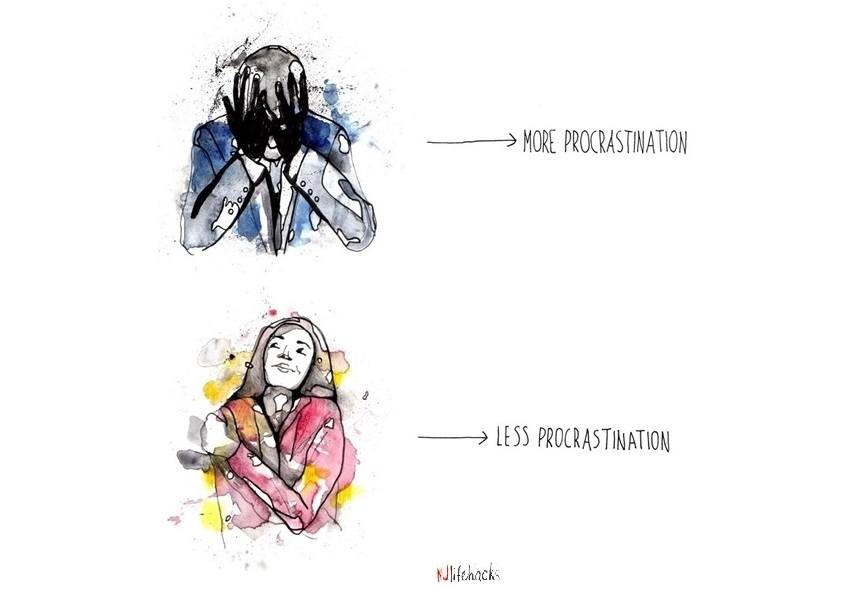 To Overcome Procrastination, Try Some Self-Compassion

This is my third article on the topic, after previously giving an overview of self-compassion and its benefits here and then explaining in detail why self-compassion leads to more motivation and achievement here.

Why Self-Criticism Leads to Procrastination

In my last article on self-compassion, I wrote about how people are afraid of becoming more compassionate towards themselves because they fear they’ll get complacent and self-indulgent.

They believe that they need to light a fire under their ass to get going – an approach that somewhat works, but somewhat doesn’t. Let me explain…

Self-criticism works as a motivator by creating fear. Because it is so unpleasant to be criticized by ourselves when we fail, we naturally want to stop that from happening. In other words, we become motivated by a desire to escape harsh self-judgment. It’s like we’re putting a gun to our own head, hoping that the terror of our own self-criticism will prevent us from being complacent.

The (conscious or unconscious) thought process goes something like this, “OMG! If I procrastinate on this, I’ll beat myself up like crazy. I need to get this done. I must force myself to do this, or else…”

While this approach works to some degree, it has some serious drawbacks.

First of all, the constant threats create anxiety and stress, both of which can undermine performance. Contrary to popular belief, pressure does not improve but hinder performance. The well-known case of performance anxiety distracts people from the task, interferes with their ability to focus, and ultimately hampers performance.

Not only does self-criticism create unnecessary stress and anxiety, it also leads to a phenomenon called ‘self-handicapping’ – a type of self-sabotage designed to undermine our performance in order to save our ego in case of failure. The goal is to sabotage yourself so that if you do fail, you can avoid feeling unworthy by blaming failure on lack of trying, not having enough time, or some other excuse.

This is a behavior I used to engage in all the time in the past. I was the guy who was “too cool” to really try hard at something and put in a lot of effort. For example, I never studied much for tests, so that I could blame any potentially bad grades on not trying instead of being dumb.

Procrastination, it turns out, is also a form of self-handicapping – and self-criticism is the driving force behind it. Kristin Neff, a leading researcher in this field, explains in her book Self-Compassion:

“Research indicates that self-critics are less likely to achieve their goals because of these sorts of self-handicapping strategies. In one study, for instance, college students were asked to describe their various academic, social, and health-related goals, and then to report on how much progress they had made toward these goals. Self-critics made significantly less progress toward their goals than others and also reported that they procrastinated more often.”

I want to repeat that last part because it perfectly sums up what we’ve just discussed: Self-critics made significantly less progress toward their goals than others and also reported that they procrastinated more often.

Not quite, there’s one last question I want to answer. So far we’ve said that self-criticism in general leads to more procrastination. But what if we criticize ourselves for the act of procrastination itself? After we’ve procrastinated? Could that not keep us from procrastinating again in the future?

The answer is a clear no. Research has found that self-forgiveness rather than self-criticism after an act of procrastination leads to less procrastination in the future. Beating yourself up for procrastinating does not work and only makes things worse.

Summing up, it doesn’t matter if you beat yourself up because of procrastination or anything else. A self-critical attitude always seems to lead to more procrastination in the future.

As I explain in detail in this article, there are many ways in which self-compassion increases motivation and performance, all of which could contribute to procrastinating less. For sake of simplicity, we’ll focus on the main aspect that I think makes the biggest difference:

Why do self-compassionate people experience less fear of failure? Because they know that they’ll be fine even if they fail. They don’t need to be afraid of self-punishment, because that’s not something they do. Instead, they forgive themselves if they fuck up, they console and comfort themselves. In other words, they experience failure as something neutral or even positive. In fact, research shows that self-compassionate people are more likely to see failure as something to be embraced rather than feared, as an opportunity for growth and learning, not a measure of self-worth.

And so, self-compassionate people can risk and try out things without being anxious about getting punished in case of failure. Self-compassion creates a kind of safe environment, allowing us to feel calm, secure, and confident. When we can operate from that place of safety, there’s no reason to be irrationally afraid of failure, no reason to self-sabotage and procrastinate in order to save our ego.

If you want to stop procrastinating, I suggest you do two things:

1. Forgive yourself after procrastinating. After an act of delay, don’t beat yourself up over it. This only makes things worse. Instead, forgive yourself. That stuff happens. People procrastinate. It’s natural. We all do it. No need to get all self-critical. And, of course, it’s fine if you feel a little bit guilty and dissatisfied. That’s just as natural. Instead of suppressing those feelings, acknowledge them and resolve to do better next time.

Now I’d love to hear from you. What’s your best strategy for overcoming procrastination? Let me know in the comments below.

Self-compassion is just one of many research-backed strategies to overcome the habit of procrastination...

If you want to learn some additional strategies that are proven to work, you're probably going to find our new free guide, 33 Proven Tactics to Procrastinate Less and Get More Done, really helpful.

Get your free copy of this 17-page guide below: