The Story of Hercules – Life Is Supposed to Be Hard - NJlifehacks 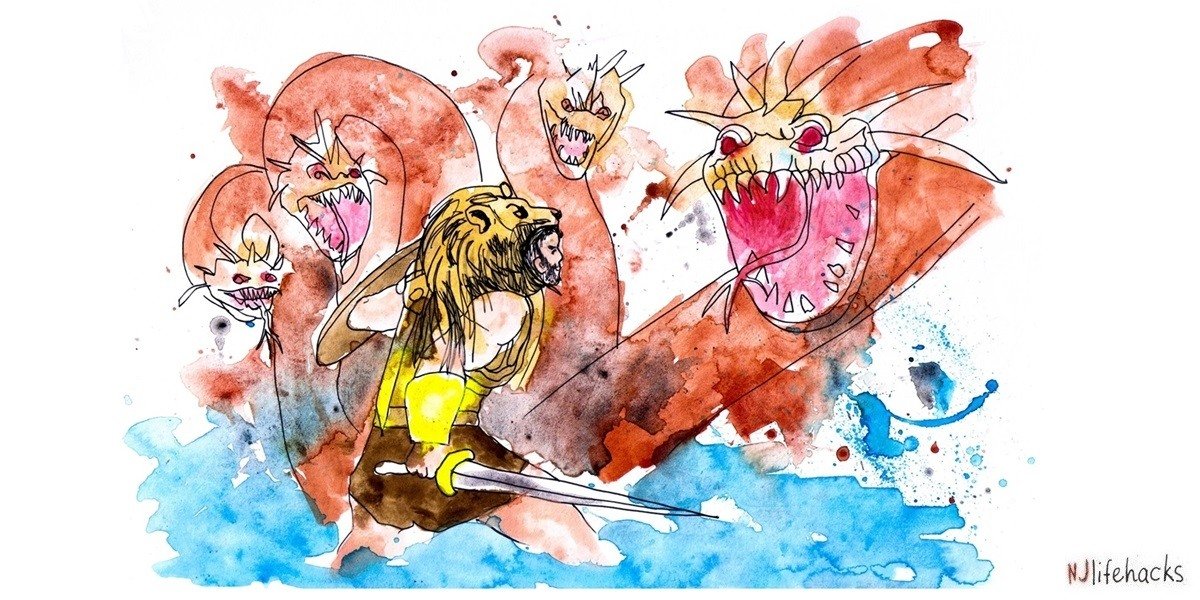 The Story of Hercules – Life Is Supposed to Be Hard

Ever felt desperate when life was hard on you?

Life is arduous at times. And we all go through difficult situations when we feel like the whole universe is sitting on our shoulders. Guess who can help in these situations?

Yes, the story of Hercules can be of great relief and give us the strength necessary to cope with the toughness we’re facing in life.

When you’re going through tough times and ask yourself, “Why is it so hard when it’s supposed to be easy?” Then the stories I’m about to tell you are going to be of great help.

Let’s enter the world of myths, monsters, and men.

The Story of Hercules

Hercules – everybody has heard of this mythical character.

Tall and muscles. Hero-like. And uh… he fought against monsters. Uh… yeah, that’s it. Ah, and I think he was Greek?

Most of us know nothing about the myth of Hercules, even if we’ve seen one of countless movies about him. So I’m about to tell you a short version of the story of Hercules before we get to the important Choice of Hercules:

Hercules is the Roman name for the Greek hero Herakles and he’s the most popular figure from ancient Greek mythology. He was the son of Zeus, king of the Gods, and the mortal woman Alcmene.

So Hercules was born a demi-god with stupefying strength and stamina, yet his life was far from easy. Hera, Zeus’ wife, knew he was an offspring of her husband and wanted to destroy him. Early on she sent two serpents to kill him, but baby Hercules strangled both of them.

He was brought up at the course of his supposed-father Amphitryon, where he had the best tutors and learned everything from wrestling over archery and horseback riding to playing the lyre and singing.

Later he went successfully into war and as a young hero he married Megara, with whom he had three strong sons. Hera could not withstand this situation and sent upon him madness in which he killed his children and his wife.

When he overcame this madness, he was grief-stricken. To expiate his sins he needed to accomplish the Twelve Labors, such as killing monsters like the Hydra, cleaning stables, or bringing back the three-headed dog Cerberus from the underworld. How else could it be for a demi-god? He succeeded and mastered all twelve labors.

Hercules was now free to do with his life what he pleased. But it was far from peaceful. Further trickeries of Hera or his own temper would cause more troubles such as killing innocent people (by accident or Hera’s trickery), living as a slave, or going into war again. He got married again, with Deianira, who later accidentally killed him with a shirt that was soaked in the blood of a centaur. That centaur wanted to rape Deianira and got killed by one of Hercules’ poisoned arrows. Before the centaur died he told Deianira that if Hercules would wear this blood-soaked shirt he would be crazy in love with her forever. Well, this trickery worked…

However, there’s a happy ending, Zeus was so impressed by Hercules’ greatness of mind that he elevated him to the status of a God.

(You can read about Hercules in more detail here.)

The Choice of Hercules

At some point in his youth, Hercules needed to make a crucial decision:

Which path to choose for his life?

He found himself confronted by two large goddesses. One, a beautiful and alluring woman, was called Kakia, although she claimed that her friends called her ‘Happiness.’ She hurried to get to Hercules so she made sure to speak first:

“My dear Hercules, I find you are very much divided in your thoughts, upon the way of life you ought to choose; be my friend, and follow me; I will lead you into the possession of pleasure, and out of the reach of pain, and remove you of all the noise and disquietude of business… Come along with me into this region of delights, this world of pleasure, and bid farewell forever, to care, to pain, to business.”

In short, Kakia (or 'Vice') promised an easy, pleasant, and luxurious path to happiness without any hardships.

Hercules was then approached by the second goddess, called Aretê, a naturally beautiful and humble woman. She told him that her path would be long and difficult:

“Hercules… before I invite you into my society and friendship, I will be open and sincere with you, and must lay down this, as an established truth, that there is nothing truly valuable which can be purchased without pains and labor. The gods have set a price upon every real and noble pleasure… In short, if you would be eminent in war or peace, you must become master of all the qualifications that can make you so. These are the only terms and conditions upon which I can propose happiness.”

In short, Aretê (or 'Virtue') predicted a tough path with great losses and sufferings that would require hard work and facing many hardships. And most importantly, that nothing that is really good and admirable is granted by the gods to men without some effort and application.

Hercules chose the path of Aretê ('Virtue') and was not seduced by Kakia ('Vice'). He chose to suffer and go through indignities such as the legendary Twelve Labors and did so willingly. This is why he led the life of a hero and had to deal with so much hardships and struggles. His inner strength to endure hardships made him an inspirational figure and a symbol of stability in the midst of chaos, even if it was caused by himself. And this is why people love this figure so much:

Even a demi-god struggles and has bad days. This is appealing. Hercules was like a super-powered everyman with all the difficulties we average people face each day. If a hero struggles, then we can struggle, too. We have nothing to complain, we’re not gods.

And this is why I’m telling you all these Hercules stories: Life is supposed to be hard.

Life Is Supposed to Be Hard “What is to give light must endure burning.” – Viktor Frankl

This is one of my all-time favorite quotes.

Viktor Frankl led a somewhat tragic life. He survived different concentration camps in Nazi Germany during World War II. Later, amongst others, he wrote the awe-inspiring book Man’s Search for Meaning (buy it used for 4$ - completely worth it!) and was the founder of logotherapy.

This quote is a great summary of the story of Hercules. And it gives me a lot of strength in moments of darkness. When life is hard, it can be hard. *Wink* And then I remind myself of this quote, and suddenly it goes much easier. It’s still hard, but I can endure it better because I know it’s supposed to be hard.

The pain and the struggles don’t magically go away, but they feel less like a burden and more like a challenge I must go through.

That’s what Aretê said to Hercules, “There is nothing truly valuable which can be purchased without pains and labor.”

In the modern world, we might call these pains and labor "failure." We must go through failure in order to get to success. This is why so many great stories start with failure. Actually, they all do. Only the media prefer overnight successes because they are sexier.

But there is no such thing as an overnight success. There’s no short-cut to success or happiness as Kakia promised to Hercules. All that is giving light must be gone through burning.

Before we get to true happiness or any other success in life, we must go through hard work and many failures. Just like demi-god Hercules did.

This is why we need to persist when it gets tough. We need to stay at it even if we don’t feel like it. We need to keep grinding and sweating and fighting off our inner demons. We shall not give up.

Like Edison did. He tried and tried and tried thousands of ways to get to the light bulb. Each failure was a way that didn’t work. You think this was easy? No, but he stayed at it and succeeded. A great genius? Rather a person with incredible persistence and an unbreakable will. He burned for years until he got to the light, literally.

That obstacle in front of you, that massive, steep, and rocky mountain, won’t move. You need to climb it or find a route around it, which probably won’t be any easier than climbing.

Point is, life is supposed to be hard. It’s up to you to choose this path and be willing to go through rough times.

I choose to follow Hercules’ growth role model. I’d rather face hardships, try to rise above them, and hopefully excel in a few things than to embrace easy living and idleness, which will result in personal stagnation or decline.

Remember: “What is to give light must endure burning.” How about some motivation?

There will be another obstacle once you’ve climbed one.

In the words of Stoic philosopher Marcus Aurelius, “The impediment to action advances action. What stands in the way becomes the way.”

When Hercules was done with all Twelve Labors, the toughness of life wasn’t over. He needed to go through more and more challenges until he died a hero.

All I want you to take away from this article is this:

All of our superheroes, kings and queens, and rock stars suffer at least as much or more than you and me and every other average person. (Not that you’re average, of course.)

It’s normal to go through tough times. It means you’re on the right way.

Now persist and be grateful for not facing Hydras and Centaurs.