“The Little Book of Talent: 52 Tips for Improving Your Skills” by Daniel Coyle (Book Summary) - NJlifehacks 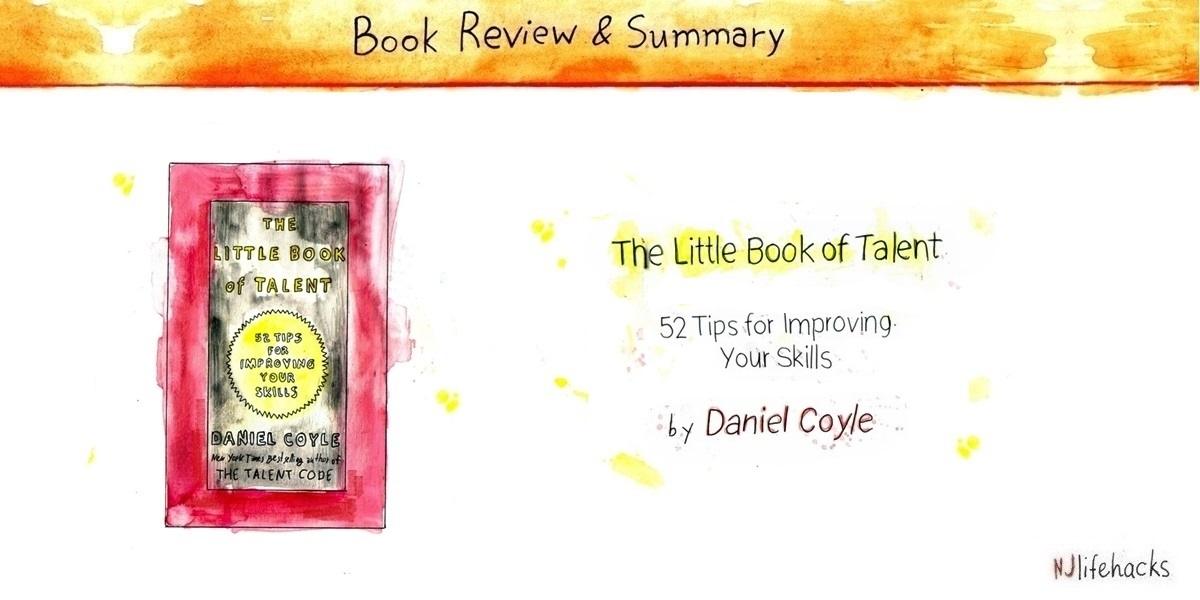 “The Little Book of Talent: 52 Tips for Improving Your Skills” by Daniel Coyle (Book Summary)

Daniel Coyle is the author of The Talent Code, in which he explains how talent is made.

Coyle arrived at this conclusion after visiting nine so-called talent hotbeds – places that create an extraordinary amount of high performers. In those hotbeds, he saw the same patterns over and over again: great performers became great by combining practice, motivation, and master coaching.

But people in those hotbeds didn’t practice like everybody else. They practiced in ways that lead to far faster and superior skill development. Coyle learned a lot of little tricks about practicing well as he was visiting those hotbeds.

The Little Book of Talent is essentially a compilation of all the little tips and tricks he learned from visiting those hotbeds. As he writes in the introduction, “What follows is a collection of simple, practical tips for improving skills, taken directly from the hotbeds I visited and the scientists who research them. The advice is field-tested, scientifically sound, and, most important, concise.”

He continues: “Whatever talent you set out to build, from golfing to learning a new language to playing guitar to managing a startup, be assured of one thing: You are born with the machinery to transform beginner’s clumsiness into fast, fluent action. That machinery is not controlled by genes, it’s controlled by you. Each day, each practice session, is a step toward a different future. This is a hopeful idea, and the most hopeful thing about it is that it is a fact.”

The book delivers a total of 52 tips for improving skills. In this summary, I’ll give you ten of my favorites.

Who The Little Book of Talent is For

1. Stare at Who You Want to Become

“If you were to visit a dozen talent hotbeds tomorrow, you would be struck by how much time the learners spend observing top performers. When I say ‘observing,’ I’m not talking about passively watching. I’m talking about staring – the kind of raw, unblinking, intensely absorbed gazes you see in hungry cats or new-born babies.

We each live with a ‘windshield’ of people in front of us; one of the keys to igniting your motivation is to fill your windshield with vivid images of your future self, and to stare at them every day. Studies show that even a brief connection with a role model can vastly increase unconscious motivation. For example, being told that you share a birthday with a mathematician can improve the amount of effort you’re willing to put into difficult math tasks by 62 percent.”

Want motivation? Fill your windshield with vivid images of your desired future.

Bookmark a few YouTube videos, and watch them on a regular basis. Personally, I like to watch clips from the movie Limitless. Makes me want to become the kind of person Bradley Cooper plays in that movie, and it never fails to motivate me.

2. Don’t Fall for the Prodigy Myth

“Most of us grow up being taught that talent is an inheritance, like brown hair or blue eyes. Therefore, we presume that the surest sign of talent is early, instant, effortless success, i.e., being a prodigy. In fact, a well-established body od research shows that that assumption is false. Early success turns out to be a weak predictor of long-term success.”

“The talent hotbeds are not built on identifying talents, but on constructing it, day by day.”

If you still believe in the myth of the natural – the myth of innate traits being more important than effort and practice, then I highly suggest reading The Talent Code, Peak, or Talent is Overrated.

These books dispel the myth of natural, in-born talent as being the driving force behind greatness. As Coyle points out: greatness isn’t born, it’s grown.

The belief in effort over natural talent will help you throughout all your life. Better to fully ingrain it sooner rather than later. (Sadly, most people go to the grave still thinking that you either have it or you don’t. Which causes a lot of damage, and is simply not true.)

“There is a place, right on the edge of your ability, where you learn best and fastest. It’s called the sweet spot. Here’s how to find it.

Comfort Zone
Sensations: Ease, effortlessness. You’re working, but not reaching or struggling.
Percentage of Successful Attempts: 80 percent and above

Sweet Spot
Sensations: Frustration, difficulty, alertness to errors. You’re fully engaged in an intense struggle—as if you’re stretching with all your might for a nearly unreachable goal, brushing it with your fingertips, then reaching again.
Percentage of Successful Attempts: 50-80 percent.

The sweet spot is where learning is maximized. It’s the place right at the edge of your comfort zone and a little bit beyond it.

He advises to ask yourself: if you tried your absolute hardest, what could you almost do? Find the boundary of your current ability, and aim a little beyond that. That’s the sweet spot.

“At all of the talent hotbeds, from Moscow to Dallas to Brazil to New York, I saw the same facial expression: eyes narrow, jaw tight, nostrils flared, the face of someone intently reaching for something, falling short, and reaching again. This is not a coincidence. Deep practice has a telltale emotional flavor, a feeling that can be summed up in one word: ‘struggle.’”

When it comes to developing skills at a rapid pace, you want to struggle.

Struggle is a sign that you’re constructing new neural connections. You’re creating myelin. You’re building skills. Call it whatever you want, but struggle means that you’re growing in one way or another.

5. Pay Attention Immediately After You Make a Mistake

“Brain-scan studies reveal a vital instant, 0.25 seconds after a mistake is made, in which people do one of two things – they look hard at the mistake or they ignore it. People who pay deeper attention to an error learn significantly more than those who ignore it.”

Paying attention to mistakes is similar to embracing struggle – it’s something we tend to ignore, yet something that is deeply necessary for developing skills quickly.

Develop the habit of facing your mistakes. Figure out what went wrong and why. Try to do better next time. As Coyle says, take your mistakes seriously, but never personally.

“This is one of my favorite tips. Napping is common in talent hotbeds, and features both anecdotal and scientific justification.

The science: Napping is good for the learning brain, because it helps strengthen the connections formed during practice and prepare the brain for the next session.”

Napping is common in hotbeds.

This goes hand in hand with Anders Ericsson’s research of expertise. He mentions in his book Peak that the best performers in the world not only practice harder and better, but they also rest more and better.

In one of his studies, the best violinists got around five hours more sleep than the average violinists. And get this: the way they got more sleep was mainly through afternoon naps.

For example, a golfer lining up a putt should tell herself, ‘Center the stroke,’ not ‘Don’t pull this putt to the left.’ A violinist faced with a difficult passage should tell himself, ‘Nail that A-flat,’ not ‘Oh boy, I hope I don’t miss that A-flat.’”

8. To Learn From a Book, Close the Book

“Let’s pretend that one week from now you will take a test on the next ten pages of this book. You have thirty minutes to study. Which practice method would help you get a better grade?

This goes back to the idea of embracing the struggle. Passively reading a book is an easy and rather effortless process – it’s not challenging enough to be considered in the sweet spot zone.

Writing a summary, on the other hand, is much more of a struggle and much closer to the sweet spot. You have to struggle to bring back key points, struggle to process and organize those ideas in a meaningful way, and struggle to write them on the page.

Closing the book and writing a summary is a pain in the ass. And that’s why it works.

9. Have a Blue-Collar Mind-Set

“From a distance, top performers seem to live charmed, cushy lives. When you look closer, however, you’ll find that they spend vast portions of their life intensively practicing their craft. Their mind set is not entitled or arrogant; it’s 100-percent blue collar: They get up in the morning and go to work every day, whether they feel like it or not.”

As the artist Chuck Close says, ‘Inspiration is for amateurs.’”

The best in the world practice their craft on a daily basis. They show up and do the work, whether they feel like it or not.

Michael Phelps makes one of the best examples for this. He writes in his book No Limits: “For five years, from 1998 to 2003, we did not believe in days off. I had one because of a snowstorm, two more due to the removal of wisdom teeth. Christmas? See you at the pool. Thanksgiving? Pool. Birthdays? Pool. Sponsor obligations? Work them out around practice time.”

Steven Pressfield puts it this way in The War of Art: “Someone once asked Somerset Maugham if he wrote on a schedule or only when struck by inspiration. ‘I write only when inspiration strikes,” he replied. “Fortunately it strikes every morning at nine o’clock sharp.’”

“We all want to improve our skills quickly—today, if not sooner. But the truth is, talent grows slowly. You would not criticize a seedling because it was not yet a tall oak tree; nor would you get upset because your skill circuitry is in the growth stage. Instead, build it with daily deep practice.

To do this, it helps to ‘think like a gardener and work like a carpenter.’ I heard this saying at Spartak. Think patiently, without judgment. Work steadily, strategically, knowing that each piece connects to a larger whole.”

Work like a carpenter – steadily, strategically, knowing that each piece connects to a larger whole.

If you enjoyed this book, here are some similar ones.

And if you want more summaries like this one, check out Blinkist for instant access to 2,000+ summaries of the best nonfiction and self-help books ever.