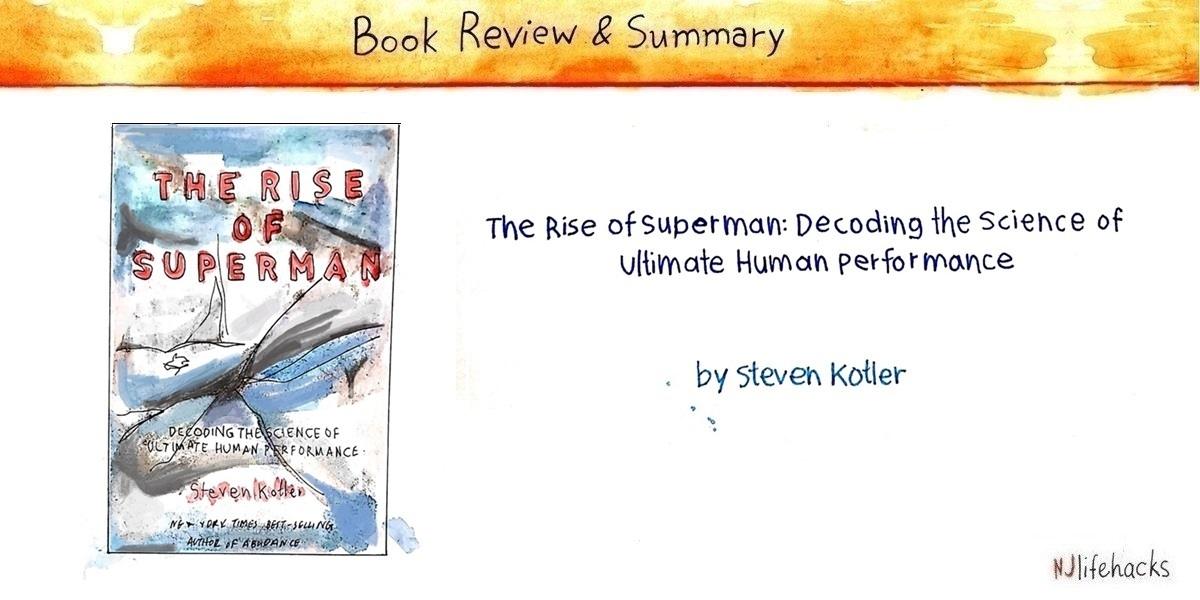 “The Rise of Superman: Decoding the Science of Ultimate Human Performance” by Steven Kotler – Book Summary

The Rise of Superman is a book about flow written by Steven Kotler, a multiple NY Times bestselling author and co-founder of the Flow Research Collective.

The story of the book is simple: Over the past three decades, action and adventure sports athletes have “pushed human performance farther and faster than at any other point in the 150,000-year history of our species.” The feats accomplished by these surfers, skiers, snowboarders, skydivers, and skateboarders have completely redefined the limits of the possible.

Their secret? They have mastered the state known to researchers as flow, described by Kotler as “an optimal state of consciousness, a peak state where we both feel our best and perform our best.”

Accessing flow states on demand is why action and adventure sports athletes have broken record after record over the last decades. It’s also the reason they have survived their outlandish attempts: “Quite simply, the zone is the only reason these athletes are surviving the big mountains, big waves, and big rivers. When you’re pushing the limits of ultimate human performance, the choice is stark: it’s flow or die.”

Kotler spent years interviewing and learning from these top athletes. In The Rise of Superman, he shares not only their stories but also reveals everything he’s learned about flow states and how ordinary people like you and I can access them more frequently so that we, too, can radically increase our performance and happiness.

1. The Promise of Flow

“Most of us have at least passing familiarity with flow. If you’ve ever lost an afternoon to a great conversation or gotten so involved in a work project that all else is forgotten, then you’ve tasted the experience. In flow, we are so focused on the task at hand that everything else falls away. Action and awareness merge. Time flies. Self vanishes. Performance goes through the roof.”

“We call this experience flow because that is the sensation conferred. In flow, every action, each decision, leads effortlessly, fluidly, seamlessly to the next. It’s high-speed problem solving; it’s being swept away by the river of ultimate performance.”

“Flow is an optimal state of consciousness, a peak state where we both feel our best and perform our best. It is a transformation available to anyone, anywhere, provided that certain initial conditions are met. Everyone from assembly-line workers in Detroit to jazz musicians in Algeria to software designers in Mumbai rely on flow to drive performance and accelerate innovation. And it’s quite a driver. Researchers now believe flow sits at the heart of almost every athletic championship, underpins major scientific breakthroughs, and accounts for significant progress in the arts. World leaders have sung the praises of flow. Fortune 500 CEOs have built corporate philosophies around the state. From a quality-of-life perspective, psychologists have found that the people who have the most flow in their lives are the happiest people on earth.”

“Flow is the very thing that makes us come alive. It is the mystery. It is the point.”

Flow is an optimal state of consciousness, during which we both feel our best and perform our best. It’s a state of rapt attention and total involvement. You get so focused and deeply engaged with an activity that everything else falls away. Time speeds up or slows down. Your sense of self vanishes. Your senses are heightened. Your performance goes through the roof.

The promise of flow, and why learning to access this state more consistently, is simple:

2. What is Flow, and What Does it Feel Like?

“…despite the ephemeral nature of the experience, so consistent are its various features that Csikszentmihalyi was able to sift through the data and isolate ten core components which demarcate the state.”

“Other researchers have since validated these ten categories and they stand as close to a working definition of flow as anyone has yet produced. Still, out of this total, three of the components — clear goals, immediate feedback, and the challenge/skill ratio (all of which we’ll explore in greater detail later) — are considered ‘conditions for flow.’ They do not actually describe the state itself. Moreover, flow exists on a continuum, so not all of the remaining seven elements need to be present at the same time. Csikszentmihalyi uses the terms microflow and macroflow to explain these variations. In microflow, only a few of his categories are fulfilled — say clear goals, concentration, and absorption, or what would happen if Laird Hamilton paddled out for an afternoon of mellow Malibu surf. Macroflow, on the other hand, is what occurs when all of Csikszentmihalyi’s conditions arrive at once — it’s the full Teahupoo.”

There are ten components to flow. The first three are conditions, the remaining seven characteristics of the state.

Flow exists on a continuum of intensity, ranging from microflow to macroflow. In microflow, only a few of the seven characteristics are present and the experience is said to be less strong, meaning it doesn’t feel as good and doesn’t accelerate performance as much. In macroflow, all the elements are present and the experience is as ecstatic and high-performance as it gets.

By varying degrees we mean that flow is a spectrum experience, not an on or off thing. As mentioned earlier, this goes from micro-flow (weak experience) to macro-flow (strong experience).

“These are qualities in the environment that drive people deeper into the zone.”

External triggers are conditions in your environment. There are three triggers: 1) High consequences, meaning there is some sort of risk involved. 2) Rich environment, which includes novelty, unpredictability, and complexity. 3) Deep embodiment, which refers to an overload of the senses, a kind of full-body awareness.

Here is some more information on these triggers:

Kotler writes about three internal or psychological triggers: 1) Clear goals, which means having a clear target, knowing exactly what you’re doing. 2) Immediate feedback, such as your heart rate or cheers from a group of fans. 3) Balance between skills and challenge, so that you’re being stretched to the outer limits of your capabilities but not so far that you’re anxious and overwhelmed.

The social triggers are conditions of the social environment that produce more group flow. There’s a total of ten of them, some of which we already know: “The first three — serious concentration; shared, clear goals; good communication (i.e., lots of immediate feedback) — are the collective versions of individual preconditions identified by Csikszentmihalyi. Two more — equal participation and an element of risk (mental, physical, whatever) — are self-explanatory given what we already know about flow.”

The remaining five triggers are:

“At a fundamental level, then, coming up with original, valuable ideas always requires risk-taking and pattern recognition — and this means dopamine. Dopamine is the pleasure chemical released whenever we take a risk or identify a pattern. We feel this inrush as excitement, engagement, and curiosity. But dopamine does more than just stimulate our emotions and increase our motivation — it also tightens focus, drives us into the now, and, thus, speeds entrance into flow. What all of this means is that the creative act (one that requires risk-taking and pattern recognition) is itself an exceptionally potent flow trigger.”

“If we put this all together, what we find is a powerful reciprocity: creativity triggers flow; then flow enhances creativity.”

“There are two common misconceptions about flow. The first is that the state works like a light switch — on or off. You’re either in flow or out. Yet flow is not binary. The state is just one step in a four-part flow cycle. It’s impossible to experience flow without moving through this entire cycle. And this brings us to the second critical misconception: that flow always feels flowy.”

According to Kotler, flow is part of a four-part cycle. Here are the four phases of the cycle:

In my opinion, there are some big holes in this flow cycle model: Are we defining flow as the entire cycle? Or just as the third step? What’s the timeline and what are the lengths of each phase? Is struggle really always required? If I want to experience flow playing football, do I need to go through the struggle phase just initially, to build up a base level of skills? Or do I need to go through it every single time I’m playing football? Or is it both?

10. Flow and the Growth Mindset

“In 2007, to see if their suspicions were right, Dweck and Bentley recruited forty top drivers, then tested them on mindset before, during, and after every race of the season. The results were significant. They found that drivers with growth mindsets were able to enter flow more quickly and stay there no matter what went wrong during the race. Across the board, they were the winning drivers.”

You’ve probably heard of the growth mindset versus fixed mindset before. People with the former believe innate traits and talents are malleable; the latter believe they are fixed. Decades of research have shown that people with a growth mindset are happier, healthier, and more successful than those with a fixed mindset. And according to this 2007 research, they also experience more flow.

If you’re not familiar with Carol Dweck’s mindset research yet, do yourself a favor and read up on it. Dweck has a book on the topic, aptly titled Mindset.